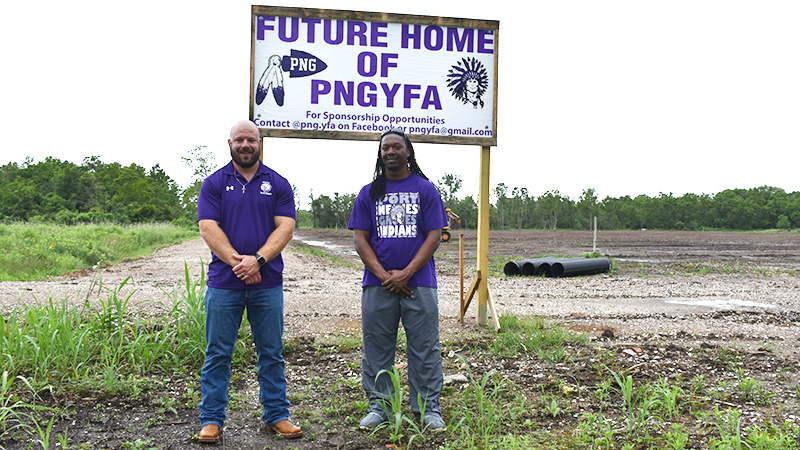 GROVES — The future home of Port Neches Groves Youth Football Association is slowly coming to shape but there’s a lot of work to be done before next fall when officials hope to see games on the fields.

A crawfish boil fundraiser will be held from 10 a.m. to 3 p.m. Saturday (May 22) at Port Neches-Groves High School stadium. Crawfish platters of about three pounds, along with a corn and potato will be sold for $20 and prepared by Ancelet’s Cajun Market.

Football signup will be held at this time and location, as well.

After days of heavy rainfall the land was more than a bit soggy Thursday when Josh Cook, president of the Association, and Chris Sams, Association concession coordinator, stopped by to show a reporter where the three football fields would be located.

Currently there is a primitive road to the back portion of the property and a section of the land is cleared off.

Cook said they hoped to plant grass before the weather turned rainy. That plan is still in the works for a later date. 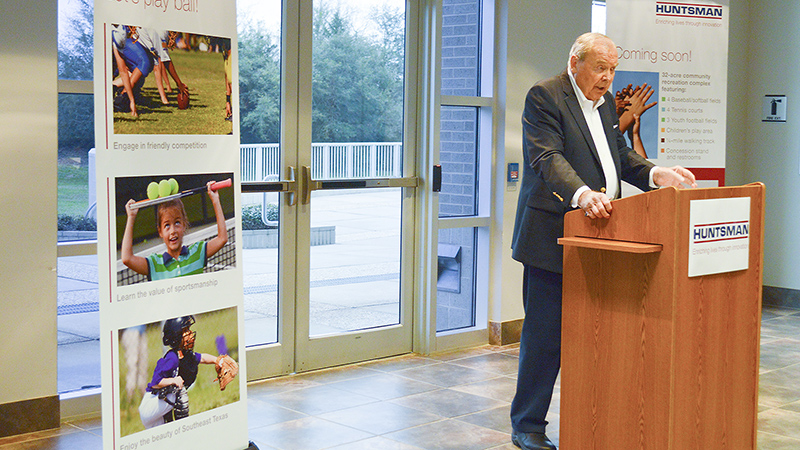 Jon Huntsman Sr., founder of Huntsman Corporation, speaks about the land leased to the city of Groves for a recreation complex during an event at the Huntsman administration building in Port Neches in 2016. (Port Arthur News file photo)

The vision is to have three football fields and give PNGYFA a home to practice and play games.

There is the issue of funding for scoreboards and a concession stand large enough for the association. There is also a need for restrooms and a storage building for football equipment that would eventually be used to hold equipment to maintain the fields.

“Last year we didn’t reach out to sponsors with everything going on,” Cook said. “It didn’t feel right to ask.”

Currently the teams have been practicing and playing on two auxiliary fields at the high school.

Sams said having their own fields gives the organization flexibility in where to practice and allows participants to have a home.

PNGYFA has a number of age groups playing: kindergarten to first grade is flag football, second and third grade is pee wee, fourth and fifth grade is junior league and sixth grade is senior league.

There wasn’t as much participation last year due to the pandemic, but the previous year there were approximately 170 children participating.

There is an added advantage for coaches and children in that Port Neches-Grove High Athletic Director Brandon Faircloth holds a clinic for coaches each year. During the clinic he lays out the high school football offense and why those pays are done.

“It’s great,” Cook said. “The first year I went I learned a lot. It’s a great thing he does. It’s great he reaches out to the coaches that coach the kids he will eventually coach.”

Faircloth also allows the up-and-coming players a chance to watch any of the high school’s practices.

The section of land where the proposed football fields are located is part of a larger sports complex. It is also located near Gulf Coast Soccer Clubs fields at the corner of Hogaboom Road and Twin City Highway.

Huntsman and Gulf Coast Soccer Club have had a partnership since a donation in 1992 of approximately 25 acres of land. Then, in 2016, Jon Huntsman Sr., founder of Huntsman Corporation, made a trip to town to discuss the leasing of 32 acres of land to Groves — the land was split between the city and football league in what is now Huntsman Recreation Complex.

The original plan for the complex is to have four baseball/softball fields, four tennis courts, three youth football fields, a children’s play area and a walking track in addition to a concession stand and restrooms.