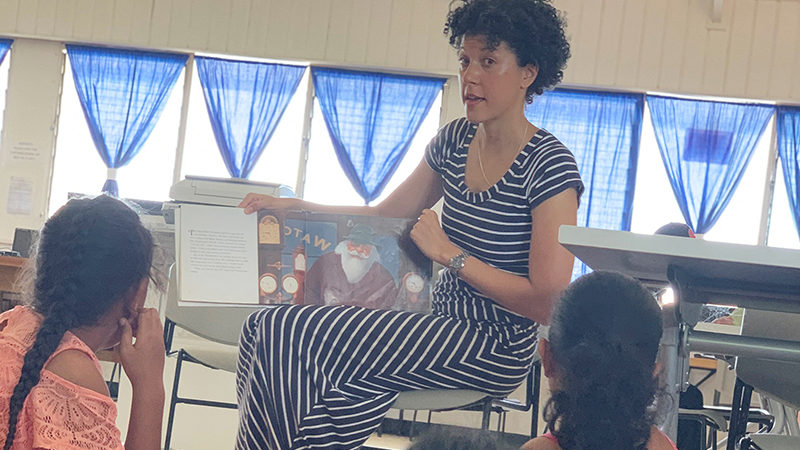 Daniella DeLaRue reads to a group of children while working for the Peace Corps in the Kingdom of Tonga. (Courtesy photo)

Daniella DeLaRue, 42, of Port Arthur, a former Peace Corps volunteer, has been accepted as a Peace Corps Response volunteer and will join the agency’s special domestic deployment to a FEMA-supported Community Vaccination Center in the United States.

DeLaRue served with the Peace Corps previously in Kingdom of Tonga as an education volunteer and was among the nearly 7,000 volunteers serving when the agency globally evacuated in March 2020.

“The gravity of the pandemic situation has called for this rare occasion where Peace Corps Volunteers to once again serve in a domestic capacity,” DeLaRue said. “I look forward to assisting in the underserved areas and communities across the country.”

This marks the second time in the agency’s history that Peace Corps Response volunteers will serve a domestic deployment at FEMA’s request — the first followed Hurricane Katrina in 2005.

DeLaRue is one among a group of Peace Corps Response volunteers who have been accepted for the deployment.

The three-month assignments reflect the agency’s commitment to President Joe Biden’s call to service to combat the pandemic with a whole-of-government effort and mobilize all resources.

The Peace Corps is placing an emphasis on assisting in communities with the greatest need, where populations are traditionally underserved.

The Peace Corps began recruiting volunteers for this special domestic deployment after it was announced by the agency and FEMA on March 31. Peace Corps volunteers and Peace Corps Response volunteers who were given “completion of service” status in 2020 as part of the global evacuation due to COVID-19 are eligible to serve.

Volunteers are assigned to language support, administrative, logistical and other work that supports the operation of FEMA-funded Community Vaccination Centers, but will not be administering the vaccine, nor will they engage in any other clinical work during their assignment.

The agency’s short-term contribution to the domestic response to COVID-19 will not alter its commitment to overseas service once conditions permit. Preparations for returning to overseas posts continue in parallel to this special assignment.