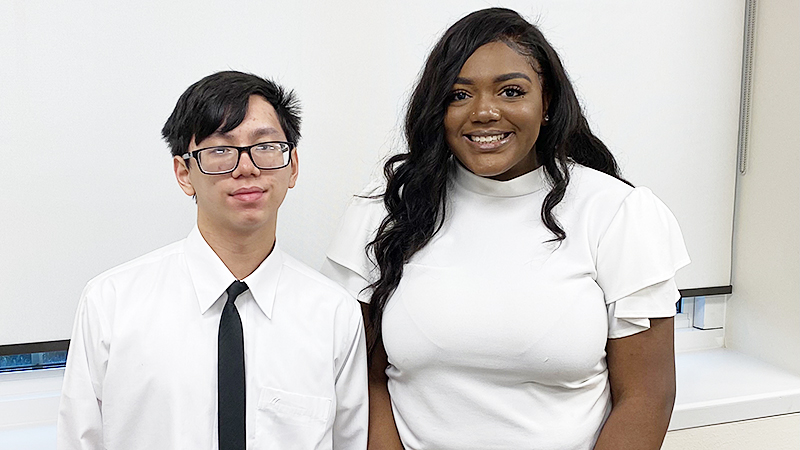 While Memorial’s valedictorian and salutatorian said they were happy to earn their respective honors, they acknowledged they still have plenty to accomplish in their academic careers.

“It is an honor to be valedictorian,” he said.

Luu fell in love with math and science when he started working experiments in class. He cited a project using a balloon as a way to propel a car as one of his earliest memories of loving science.

Luu wants to be a pharmacist when he graduates.

He said he strived to earn good grades to make his parents proud and prove to himself he could do it.

When not studying, he can be found reading fantasy novels and playing video games.

Mia Wells will be the salutatorian for Memorial’s class of 2021. She will attend Huston-Tillotson University in Austin.

“This is something that I have worked really hard for,” she said of being named salutatorian. “I have always been at the top of my class. I’m ready to go to college.”

Wells said she will start her college studies in biology and move to pre-med.

“I really like science,” she said. “In 10th grade, I had a teacher named Mr. Heil. He is a really good teacher. I had him for chemistry. His love of science really showed through his teaching. That made me want to get into science.”

Wells said her parents are not strict about her grades and always wanted her to do her best.

“I want to push myself,” she said. “I know how far I can go and I don’t want anyone to do it for me. My parents are good parents. They are just happy that I am graduating, so for me to be at the top was something more for them.”

Wells found a good balance between school and her social life.

“I go out with my friends,” she said. “I took notes in class, but I didn’t have to study much.”

Wells said she enjoyed the challenge of physics.

“It was a little harder, but not as fun as chemistry,” she said. “I also really like English. I really enjoy writing. It is something I am really good at.”

“That was the first time I ever had that,” Wells said. “I wrote about going to the beach. I never described something like that before. It was pretty fun. Last week, I had to make two poems and that was tough but, once I got into it, it was flowing.”