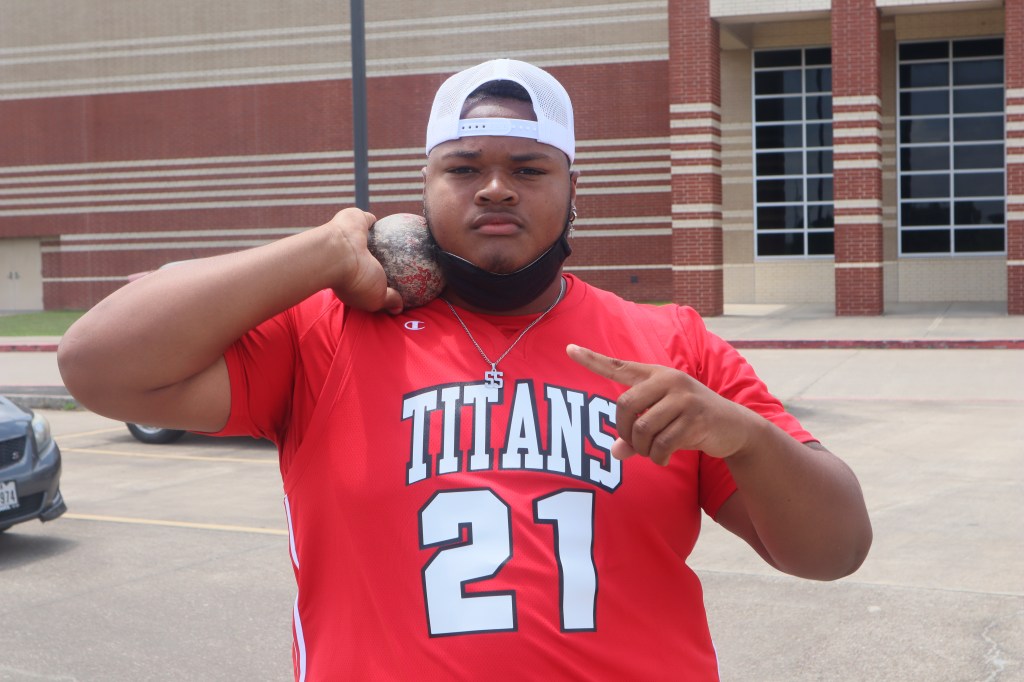 Tre’Vonte “Tink” Caines became the first Titan to earn a state title in a field event in more than a decade. Chris Moore/The News

Memorial’s Tre’Vonte “Tink” Caines was “in the zone” as student athletes from other schools threw the shot put at the UIL state track and field meet in Austin this past weekend. The senior had recorded the farthest throws all year for 5A, making him the prohibited favorite.

For most of the season, Caines easily won the meets in which he competed by several feet.

However, right before it was his turn, a competitor launched a throw of 58 feet, which matched Caines’ personal best.

“I was sitting down and I was in the moment,” Caines said. “When he threw that, I jumped up and thought, ‘He’s coming for me.’ It was war time.”

Caines stepped up and threw his personal best of 59’7.5”.

“I felt it,” he said. “When I first threw it, I felt like I used everything I was taught to use. I used all of my legs. It was the perfect height. It felt good. I was ready for it to land. I went back to my coach and told him, ‘We got it.’”

Seconds later the board showed his distance at the top of the leaderboard.

Prior to this year, the senior had not made it past the regional meet. Caines had a chance to make it to state last year, but the pandemic shortened the season.

Both were the first Titans to medal at a field event in more than a decade.

Caines became the first individual to win a state track and field event for Memorial since Kary Vincent Jr. won the 200-meter dash in 2017.

“I always looked up to those guys,” Caines said of past Memorial greats. “It feels good to be on that list. To be honest, it really hasn’t hit me yet. People are congratulating me, but I still feel normal. I feel like that was a regular meet.”

“The goal is always to get to Austin and receive a medal when you get there,” he said. “These two guys showed that type of work ethic all season. Both of them had (personal records) in their events. It was great to see them go out on a high note.”

Granger said he hopes the success of both Titans creates a spark for other students to join the field events.

“In the past, we have had running events with no field,” he said. “This year, we had field and no running. We have got to make that balanced as a team to make out goal, which is to win a state title.”

Caines will attend Lamar University on a football scholarship next year and will also throw for the LU track and field team.