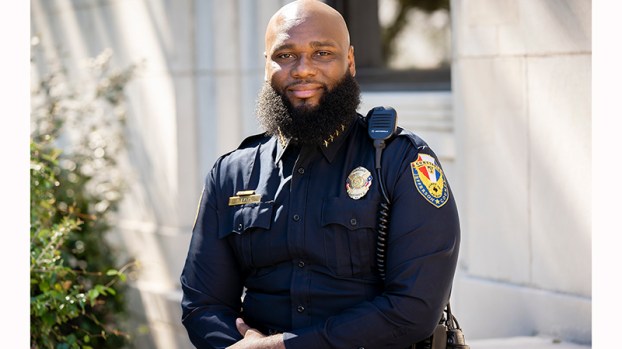 This year Constable Christopher L. Bates has been selected to receive the highest award Lamar University bestows upon its graduates.

He was honored May 7 with a reception, dinner and award presentation program held in person and virtually.
“It is an honor to congratulate and celebrate Chris by awarding him with the 2021 Distinguished Young Alumnus Award,” said Shannon Figueroa, director of Alumni Affairs.

“His professional accomplishments, service to his community and loyalty to his alma mater exemplifies the Lamar University spirit.”

Bates, was sworn into his third, four-year term as constable of Precinct 2 in Jefferson County Christopher Bates in January 2021.

In May 2008, he graduated from LIT with a certificate in law enforcement, was licensed as a Texas Peace Officer and received a bachelor’s degree in general studies.

He joined the Port Arthur Police Department as a patrol officer, worked as a Deputy Constable for Precinct 8 and as a bailiff for Justice of the Peace Precinct 8 Court.

In September 2010, Bates joined the Port Arthur ISD Police Department and realized a need to do more to help youth.

Bates established the “Constable Christopher Bates Criminal Justice Scholarship” and has awarded more than $12,000 in scholarships to high school seniors.

He also started the “Christmas with the Constable” toy drive and Christmas program benefiting the Salvation Army.

Bates is a member of Alpha Phi Alpha Fraternity, Inc., is a past president of the Lamar University Alumni Advisory Board, and is a recipient of the Southeast Texas 40 Under 40 Award, and was named the 2017 Constable of the Year for the State of Texas by the Justices of the Peace and Constables Association.