Nederland’s Megan Do upsets No. 1 seed to win tennis regional 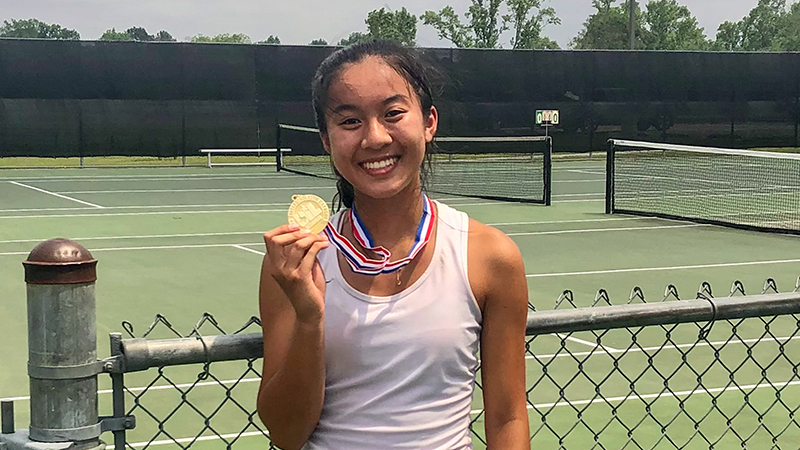 NEDERLAND — Nederland’s Megan Do upset the No. 1 seed in the 5A Region III tennis tournament this week. The win advanced Do to the state tournament for girl’s singles.

Do defeated Crystal Zhou, who was the No. 1 seed from Austin Lasa. The match took nearly four hours, Nederland coach Jorge Lopez said. Do won 6-4, 4-6, 7-6.

“She surprised me and she surprised everybody,” Lopez said. “Just to give an idea of how good the other girl was, her universal tennis ranking is about the same as Lamar’s No. 1 girl. She was playing someone that good. We didn’t really expect. We were happy she got to the finals.”

Lopez said he told Do she was going to have to make Zhou move in order to pull off the upset.

“(Do) out hustled her,” he said. “Our plan was to win a set and make her nervous. Everything played out perfect. It was like a movie. We got to the tie break and I told Megan that (Zhou) is supposed to beat her. We kept trying to be positive and keep her upbeat. The other girl felt the pressure and hit the ball out.”

Lopez said that was the first time he saw Do exhibit that level of emotion during a match.

“When she saved a match point, she laughed and smiled,” he said. “I’ve never seen her celebrate in that way. I have seen her lose before. This was the one that she wanted to win the most. I asked her if she had ever gone to a finals and beaten someone that she knows is better than her and she ‘no.’”

Lopez said he told Do about a time he beat someone who was ranked higher than he was and the impact the victory had on his life.

“I played nationals,” he said. “One matched changed my life. I beat the No. 2 player in Chile. After that, they called me to the national teams and paid for my trip just by beating one person. I told her that one win can change it all. What is expected of her has changed. She is going to stay beating people like that.”

Do is the first Nederland tennis player to win regionals twice.

As a freshman, she won regionals on a doubles team.

Do’s older brother Brandon Do won the 5A boys singles state title in 2019.

Lopez said the win ensured Do won’t be an underdog often.

“A lot of other coaches from the region told me how impressed they were,” he said. “They were very complementary. She has the respect of the rest of the region. I think people thought she was good, but now everyone knows it.”