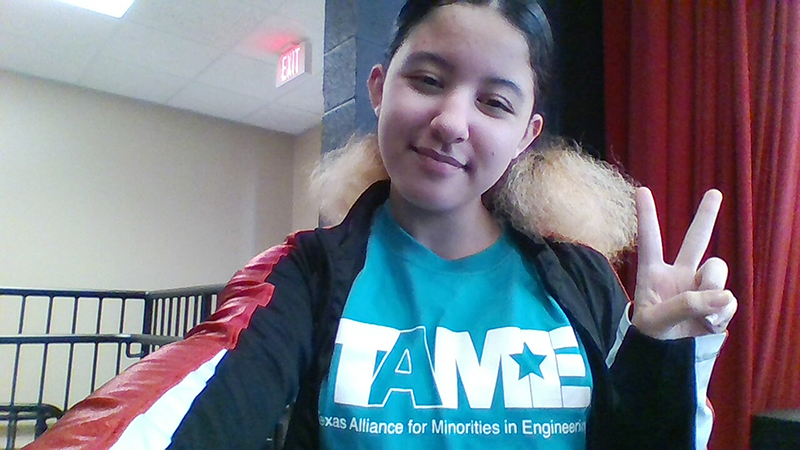 “Honestly, it was really surprising. I wouldn’t think I would be the one to set this record,” Starks said. “There are a lot of smart people here and to think I would be one (to earn the distinction).”

This marks the first time a student from the Ninth Grade Academy has reached this far in TAME State Competitions, Starks’ Algebra I teacher Emerzen L. Echavez said.

Echavez said the competition includes problem solving and features questions in earth science, biology, chemistry and physics. But, as a 9th grader, Starks hasn’t yet taken chemistry or physics.

“She is a really smart student,” Echavez said.

The algebra teacher is looking for scholarships for his students.

TAME, or the Texas Alliance for Minorities in Engineering, is for minority students.

In addition, the sponsors of the competitions are typically refineries; this year’s sponsor for the state competition is ConocoPhillips.

Dr. Angel Murphy, principal of the school, said the district competition for the Golden Triangle area held Feb. 6 — the precursor to the state competition, had a number of standout students.

Karena Stark earned a first place title, and second place went to Harleen Singh with both students advancing to state, which was held Saturday.

Murphy said the district has been involved in TAME under her leadership for three years and she is in her seventh year of leadership there.

“Each year we’re getting better and better,” Murphy said. “Mr. Echavez did a great job.”

Starks said she was offered a chance to be part of TAME in seventh grade but declined because she was busy. She took up that offer in the ninth grade because she is interested in engineering.

She said the competition was difficult and covered courses she hasn’t yet taken in school.

“I’m a curious person so sometimes I just look up and learn stuff,” Starks said of how she came to learn the topics that are new to her.

And while she’s interested in chemistry as well as engineering, she has other goals.

“My dream doesn’t have to do with math and science, but if I could, my mom works in a refinery and I’d like to work in a refinery as a backup,” she said, adding her dream job is to be an author.