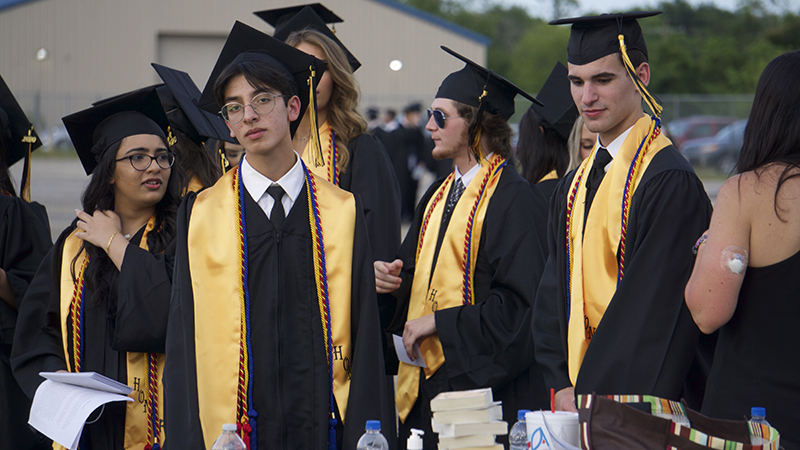 NEDERLAND — Are you interested in wearing striped or plaid shirts?

If you are a 5th through 12th grade student in the Nederland Independent School District in academic year 2021-22, a more flexible campus dress code provides those options.

Administrators unveiled the options this week in front of the school board, which unanimously approved them to take effect next academic year.

Minor changes could still be made to the final guideline before it is distributed to parents and students.

The new dress code follows an effort led by Assistant Superintendent Dr. Steven Beagle, who worked with a committee of students, teachers, parents and administrators over three meetings to drill down on new NISD specifics.

Beagle said his committee reviewed dress codes from numerous school districts and talked three times for more than 90 minutes each time to create a consensus.

“We want to allow students more flexibility and be able to wear a stripped shirt, plaid shirt or different styles,” he said. “Of course we don’t want people to uncover areas that need to be covered. This is going to give us the opportunity to have a lot more flexibility with students and still allow the students to look very nice.”

Shorts are now allowed to be worn three inches above the knees.

In an effort to promote a culture of higher education, Nederland is allowing college-themed shirts at any time.

“We don’t want it oversized,” Beagle said. “We want our pants to fit at our waist and not be too baggy or too big. There are going to be things we don’t think of and we’ll be able to adjust when needed.”

Kieschnick said the language in the proposed dress code was well written and eliminated as much of the gray area as possible.

“There is a real wise word there when it says pants must ‘ride’ at the waist,” Kieschnick said. “I think that is important.”

In the past, Beagle said students would wear a shirt that wasn’t dress code underneath their top clothing, then go to the bathroom and take off their top shirt and return to class out of dress code.

“If you have an undershirt that is within dress code, if they get hot and take it off they are OK,” Beagle said. “A lot of this comes from years of experience dealing with lots of things.”

Although some college apparel will be allowed, no other high school or neighboring school district-themed clothes are permitted.

“It is a badge of honor to wear somebody else’s high school stuff,” he said. “We would rather (students) wear college stuff. We don’t want to promote a rival high school or something like that.”

Beagle said the committee agreed on most things following informed give-and-take throughout the process.

“One thing I had an issue with is I didn’t want holes in pants,” he said. “If you get a little hole, it turns into a big hole and rips all the way down the leg. I did concede that you can have frayed but no holes.”

White pants and shorts will be allowed, but principals have discretion to determine if a garment is too thin and showing.

“We tried to work very hard in the beginning in our committee where people felt comfortable saying things,” he said. “Our parents chimed in. Our students chimed in. Teachers chimed in. You can still wear a Bulldog shirt and jeans. You still have lots of flexibility.”

School Board President Micah Mosely said he felt the new dress code would be received well, adding he “definitely understands” why many wanted to see it updated.

School Board Vice President Nicholas Phillips said he liked that students are now allowed to wear different colored shoelaces but he questioned the stance on backless shoes.

“Flip flops create safety hazards, so to me, what’s the difference between a backless shoe and a flip flop if a flip flop causes a safety hazard?” Phillips said. “I would either say no backless or who cares if they are backless. It’s the same safety issue.

“I just think we are setting up the administrators for a back-and-forth with parents. One says, ‘who cares’ and the other says ‘well, no, it matters’ and we’re pitting our administrators against each other and that is not good.”

Beagle said the district may change the wording on that in an effort to create more clarity.