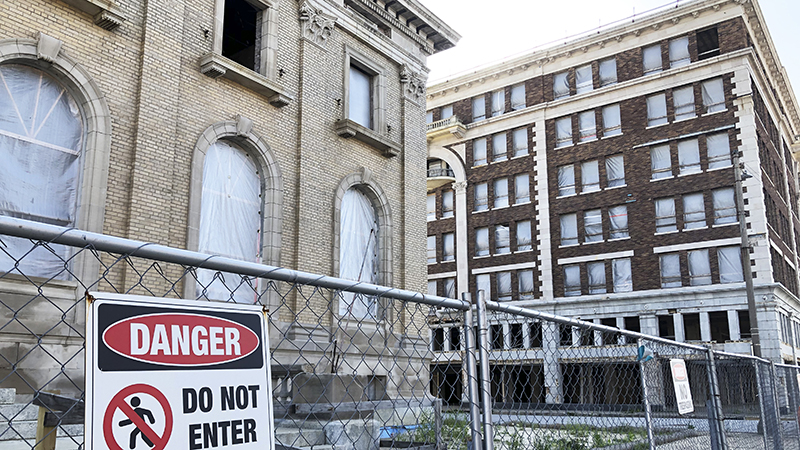 A representative from Motiva Enterprises addressed Port Arthur city staff Thursday to ensure them that the development of four downtown buildings would continue soon.

“I know that there’s been some recent press that the project has stopped,” said Jay Hall, Motiva’s deals manager for strategy and business development. “It has done anything but stop.”

The rumors began circulating in late March when construction on two historic buildings purchased by the company came to a halt. Motiva purchased the Adams Building and Federal Building on Austin Avenue two years ago after announcing in 2017 that it was investing $12 billion in the expansion of the Port Arthur refinery, creating as many as 12,000 jobs.

“We are waiting for the current historical zone to be approved by both the state and federal government,” Hall said. “We are making progress with that, but it takes time. For the most part we’ve been given the green light, but haven’t been given the certifications.”

Hall said in the meantime, the company has been working on the internal and external architectural designs so it can “hit the ground running” once the certificates arrive.

Originally, the buildings were expected to be complete by the first quarter of 2022. Because of the delay, that timeline could now extend to early 2023.

City Manager Ronald Burton said plans for the new health department, which will cost about $4.5 million, should be ready in approximately 45 days.

Hall was asked whether Motiva still intends to purchase the Hotel Sabine, which was mentioned when the company first began downtown development.

“That’s still under the drawing board and would fall under the historical district as well,” he said. “Once we get the certificates, we will reengage the city regarding the Sabine. We don’t want to get ahead of ourselves; want to focus on what’s in our current portfolio.”

When development stopped in March, several city and county leaders expressed concern that Motiva would not continue with the project. To avoid any future confusion, Councilman Thomas Kinlaw III asked Hall about providing reoccurring updates.

“It kind of put us in a panic mode when construction stopped and we didn’t actually know what was going on with that project,” Kinlaw said. “We’re excited. We want you there. We want to continue the project. We want to be as helpful as we possibly can.”

Hall said he will coordinate with Burton today to schedule monthly updates.