PNG ready for Friendswood in postseason clash of high-ranking teams 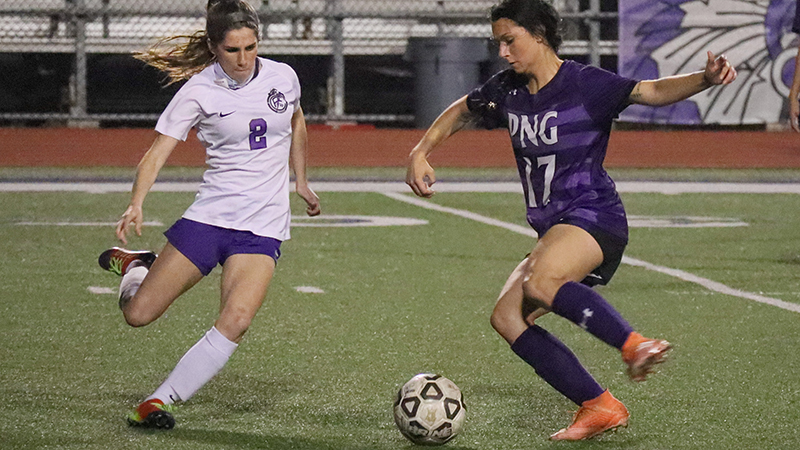 Port Neches-Groves' Kelsie Comeaux tries to get past a defender during the Indians' 2-1 win over Fulshear Tuesday.

PORT NECHES — Fresh off a 2-1 victory in the second round of the 5A playoffs, the Port Neches-Groves girls soccer team will face Friendswood at Goose Creek Memorial High School at 7 p.m. Friday.

Friendswood is coming off a shootout victory against Fort Bend Kempner Monday.

The Texas Girls Coaches Association has PNG ranked No. 4 and Friendswood ranked No. 6 in the state for 5A soccer.

Friendswood defeated Crosby 6-0 in the opening round.

“No. 21 (for Fulshear) was very strong,” Bates said. “No. 7 is more agile. She is a dibbler and a cutter. We will need to shut her down. They also have a pretty good backline. A couple of girls can take a shot from distance. They like to possess the ball and keep it, so we will have to be smart with that.”

While some rankings have PNG ahead of Friendswood, Bates said Friendswood was one of the early favorites to go to state.

“Everywhere that I have seen rank, they rank higher than us,” Bates said. “Everyone is picking them to go to state from our region.”

Bates said her unit will lean on its team speed.

“When you have speed on defense, you make up for those mistakes,” she said. “You can recover. They will have to get by you two or three times. On offense, if we can get behind you a few times, as long as when finish one of those chances, we have a chance.”

With 16 minutes left in Tuesday’s game with a 1-0 lead, Port Neches-Groves’ Rylee Miller found Grace Richard on a corner kick at the back post for the score that ended up being the difference in a 2-1 victory at PNG High School.

“I saw an opening in the back,” Richard said. “The ball was sent back to the back poll. I went in there, got it and made contact with the ball and made it in.”

The team swarmed Richard, who faced the crowd to an ovation.

While PNG had some good shot attempts in the first half, the Indians could not find the back of the net. The two teams went into half time tied at 0-0.

“I feel like we have always been a second-half team,” Richard said. “We have been working all season to string together both halves, but this second half we just went out and had everything going towards it. I think the difference is we knew that everyone that came out here was behind us and supporting us and helping us get there.”

One of the reasons PNG was able to hold Fulshear to a low score was the play of freshman goalkeeper Emerey Riley.

With the score still tied, Riley came up with two huge deflections in the 19th and 16th minutes of the second half.

“I thought she was lights out,” Bates said of Riley. “She was explosive. Those saves — I can’t wait to go back and watch them on video. (Fulshear) has a very special player and my defense did a great job. I am so proud of them.”

Bates is happy to advance and keep hopes of a state appearance alive.

“It feels good,” she said. “We have our work cut out for us. Friendswood is a very good team. We are going to have to go back to the drawing board and get it done. We are going to pull off the upset because everyone has written us off.”

Richard said she is ready for the next match and a chance to advance further in the playoffs.

“It is amazing,” she said. “It is a great feeling. We have worked so hard over the season and have gotten so much accomplished. I just know we are getting closer and closer to state.”