Bike blessing is back just in time for riding season 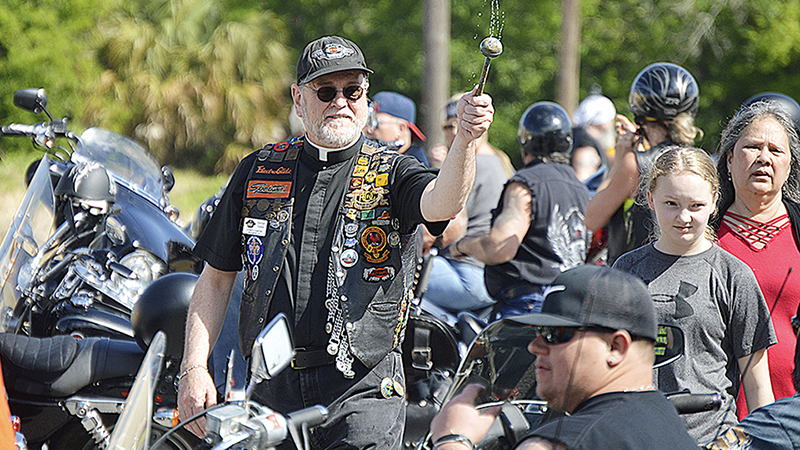 Bikers and motorcycle enthusiasts will soon gather for prayer and camaraderie while helping to benefit a local organization.

The Rev. Sinclair Oubre, Apostleship of the Sea, Catholic Diocese of Beaumont, said this year’s event is modified due to COVID-19 and would not be an official “ride.” Since there is no ride, the Seafarers’ Center is seeking donations — kind of a “pass the helmet to support the Seafarers’ Center,” he said.

In addition, there will be 25th anniversary pins and patches for sale and a 50/50 raffle.

Doreen Badeaux, secretary general Apostleship of the Sea of the United States of America, said the bike blessing began as an event to assist Oubre and the Seafarers’ Center with the ministry to seafarers. This goes back to when the ministry was housed in a doublewide trailer at the Port of Port Arthur.

Badeaux said the bikers wanted to come together to do something for the center and also wanted to have their bikes blessed at the beginning of riding season.

“They take this very seriously,” Badeaux said of the bike blessing. “It’s definitely kind of an outdoor party feel but at the time of the actual blessing, everybody is very serious, bowing their heads and very respectful. A lot of prayers are offered at that time. People mention bikers or friends who have passed or are in the hospital and not able to be there.”

To sum it up, there’s a fun, party atmosphere yet respectful when it comes to the blessing, she said.

Last year’s event was canceled due to COVID-19 and organizers are excited for this year’s event. Oubre said he hopes people stick around after the blessing and visit with one another and renew friendships.

The entire event takes place outdoors to help with social distancing, according to information from organizers.

B.J. Stelly, the namesake of the event, was a Port Acres area resident and rode motorcycles most of his life. He battled addictions and during recovery started volunteering at the center.

After several years of voluntarism he was killed in a motorcycle crash in New Orleans.

The Seafarers’ Center is an ecumenical Christian outreach to the people of the sea, such as merchant mariners, seafarers, dockworkers and all who make a living by the sea.

The organization serves 27 facilities, which operate, along the Sabine Neches Waterway, such as the ports of Port Arthur, Sabine Pass and Orange and industrial sites.

“It’s all about the Beatitudes, welcoming a stranger,” Badeaux said referring to the eight blessings mentioned by Jesus in the Sermon on the Mount. “We go to the ship and see what they need. Right now they’re wanting to see something different because they are not allowed off the ship because of COVID.”

Many mariners are quarantined and have not had outside contact with others, she said.

The Seafarers’ Center will bring them shopping, if they are allowed to leave. Most recently, some mariners purchased exercise equipment and the folks at the center picked it up and delivered it to them.

The center also makes sure the mariners have phone cords to charge their cell phones, provides wifi hot spots and helps them reconnect to their families.

“You can really sum it up to the Beatitudes, connecting faith and family,” Badeaux said of the center.