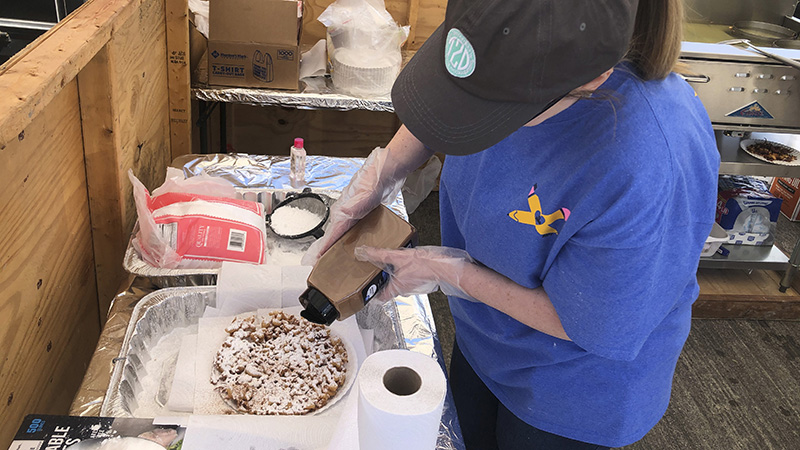 Just as she does every Spring Break, Katie Rendon on Friday made funnel cakes in Nederland. But while the smell and taste were the same, her surroundings certainly were not.

The event, which ran from noon-5 p.m. Friday as it will again today, served to help the Port Neches Rainbow Girls replace funds lost from the canceled Nederland Heritage Festival. Since the 80s, it has been the non-profit’s largest annual fundraiser, bringing in an average of $5,000 each year.

“This is our first time to go mobile,” said the 35-year-old, who joined the organization at the age of 11.

The International Order of the Rainbow for Girls is a service organization aimed at building self-confidence, leadership skills and community service skills in young women between 11 and 20, according to its website. 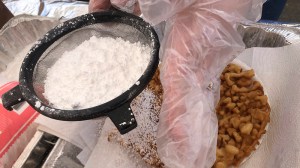 The funnel cakes sold by Rainbow Girls typically are sold at the Nederland Heritage Festival, and serve as the group’s largest annual fundraiser. (Monique Batson/The News)

“This money goes towards our travel expenses and allows us to give back to the community and donate to other charities,” Rendon said.

But that’s not the only purpose of the group, said former member Mariah Dennis. The 23-year-old and her sister, 20-year-old Mackenzie Dennis, were present Friday to support the organization from which they learned about much more than funnel cakes.

“What I got most out of it was the value of helping and putting other people first,” Mariah said. “I learned to lend a helping hand, find common ground and make the most out of everything I do.”

Her sister was in agreement.

“Our family was very involved,” said Mackenzie, who joined at the age of 7. “I made friends all over the state. It helps build leadership and communication skills.” 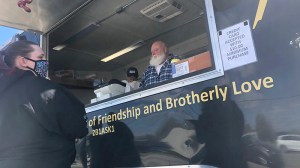 Mariah Dennis, 23, purchases food from the Nederland Masonic Lodge near the parking lot of First Baptist Church Nederland. The lodge serves as the parent organization of the Rainbow Girls, of which Dennis was a member. (Monique Batson/The News)

Next to the Rainbow Girls was the Nederland Masonic Lodge, their parent organization. The lodge, too, was attempting to recover funds lost when the 2021 Nederland Heritage Festival was canceled due to coronavirus concerns.

“I’ve got to support these guys,” said Tracy Maddox, of Nederland, while he stood in line to order street tacos from a menu that also included brisket, links, boudin, pulled pork sandwiches, among other things.

But for Maddox, 37, the support went farther than food.

He joined the organization in 2013, not long before the death of his 2-year-old daughter.

“They stepped in and helped with the funeral, with funds, with everything,” he said.

Since, Maddox has served in every possible way – even by buying street tacos on a Friday afternoon after working nights for 14 conservative days.

And his oldest daughter, 14, plans soon to join the Rainbow Girls.