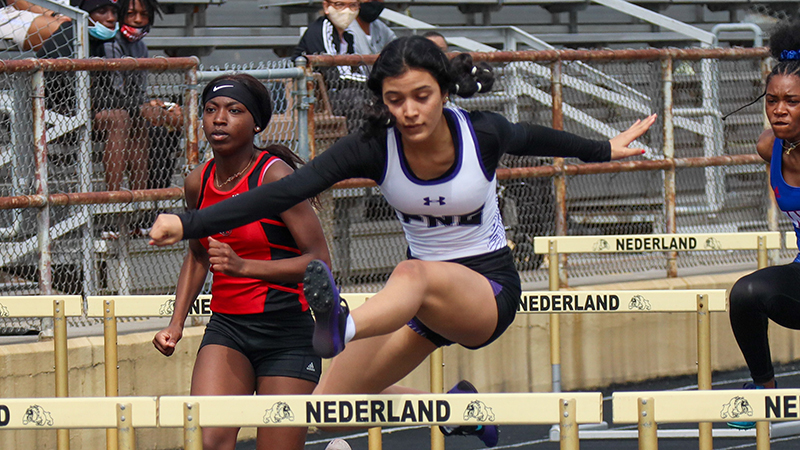 On the boys’ side, Memorial finished third with Port Neches-Groves and Nederland trailing in fourth and sixth place, respectively.

On the girls’ side, PNG finished second, followed by Memorial and Nederland in third and sixth, respectively.

Memorial’s Alexia Lewis finished second in the girls’ 100-meter dash with a time of 13.16.

PNG’s Sanria Butler and Memorial’s Antoneia Bohanon came in first and second, respectfully, in the 400m. Butler finished with a time of 60.22.

PNG’s Alex Herrera finished third in the 100-meter hurdles with a time of 17.02.

Memorial’s Erial Fontenot, Antoneia Bohanon, Alexia Lewis and Jeryne McZeal came in first in the 4×200 relays with a time of 1:49.20. They edged out Beaumont United by two-tenths of a second.

PNG’s team of Lydia Garza, Jakeyla McDaniel, Eddy Dean and Katherine Page came in third with a time of 1:50.20.

PNG’s team of Garza, Page, Kyleigh Bushnell and Butler came in first in the 4×400 relay with a time of 4:15.17, which was more than four seconds faster than the second-place Barbers Hill team.

Nederland’s team of Rylee Bolser, Kamryn Smith, Jordan Minaldi and Lana Louvier came in third place with a time of 4:20.77.

Nederland’s Bolser earned third place for a jump of 5-feet-4-inches.

The Titans’ Tony Brooks and Elijah Williams finished in first and third, respectfully, in the 200-meter dash.

PNG’s Cyrus Jacobs finished in first place in the 400-meter dash, followed by Ayden Chatman of Memorial, who came in third.

Memorial’s team of Tyrence Augusta, Jaylon Guilbeau, Sanders and Edward Brown won the 4×100-meter relay with a time of 41.82.

Nederland’s Hefner earned second place with a jump of 10 feet.

Memorial’s Maleek Jones earned first place with a jump of 44 feet and 1 inch.

Nederland’s Kyndon Fuselier finished in second place with a jump of 42 feet and 10 inches.

Memorial’s Tre’Vonte Caines earned first place with a throw of 145 feet, which was 25 feet further than PNG’s Jansen Ware, who came in second place.