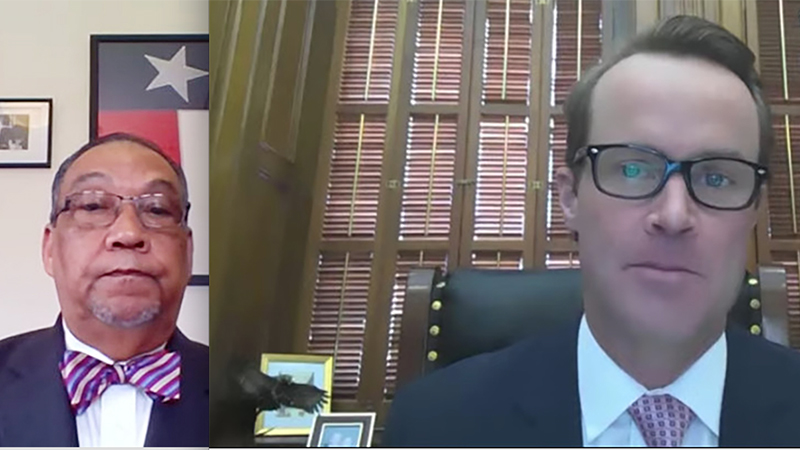 Every two years between 250 to 300 delegates from across Southeast Texas descend upon the state capitol touring the hallowed halls, meeting with lawmakers, networking with those with shared interests and ending with some celebratory food and music.

The purpose: Bringing a legislative agenda focusing on economic development, education and workforce development, environmental quality and stewardship, healthcare, insurance and taxes and transportation, energy and infrastructure to area to lawmakers with Golden Triangle Days in Austin.

Due to the COVID pandemic, this year’s event was held virtually, and though it didn’t allow for the face-to-face interaction of previous events, it did allow for a wider audience, as was noted by event organizers.

Texas House Speaker Dade Phelan, R-Beaumont — the first Southeast Texan to serve as speaker in the history of the state — said lawmakers have been busy these past two months as bills will hit the floor on Friday.

Phelan filed seven bills over the weekend and a few more are set to be filed this week, most of which deal with the recent winter storm that impacted the state.

Most of the bills deal with the electric Reliability Council of Texas, which heads up approximately 90 percent of the state’s electrical grid and which suffered during the storm.

Phelan is looking to restructure the board of ERCOT to make sure more Texans are on it. Currently some of the board members are from other parts of the nation and some are not in the United States, he said.

There is also a bill that prohibits local governments from banning the use of natural gas in their jurisdictions put forth by Rep. Joe Deshotel, D-Beaumont, Phelan said.

The bill is a way to allow for the option for residential or commercial buildings to choose the type of energy wanted.

This issue came to the forefront during the winter storm and blackouts. Some were able to use gas fireplaces to heat their homes in the deadly cold.

Deshotel is also the author of “ban the box bill.”

The bill, he said, has a tremendous amount of support.

“It prohibits employers from asking about criminal history on the job application itself,” Deshotel said.

If passed, it would not prohibit the employer from asking the person the question; just remove it from the application.

For example, if an employer needs to hire one to two people and 20 apply, he or she may toss the applications to the side where the person checked the box on criminal history. But this may be an employable person who is not given the chance to get a foot in the door, maybe for a minor charge that occurred 20-30 years ago, he said.

“We have industry in our area that is having difficulty having qualified employees and an increased need in the workforce,” he said.

Importance of the area

The importance of the Golden Triangle isn’t lost on the delegates or lawmakers.

During the 2019 legislative session more than 7,000 bills were introduced. The GTDA legislative agenda included 17 items, seven of which were signed into law, according to information presented at the event.