Alyssa Collazo does it all for Nederland softball. Will coach let her pitch? 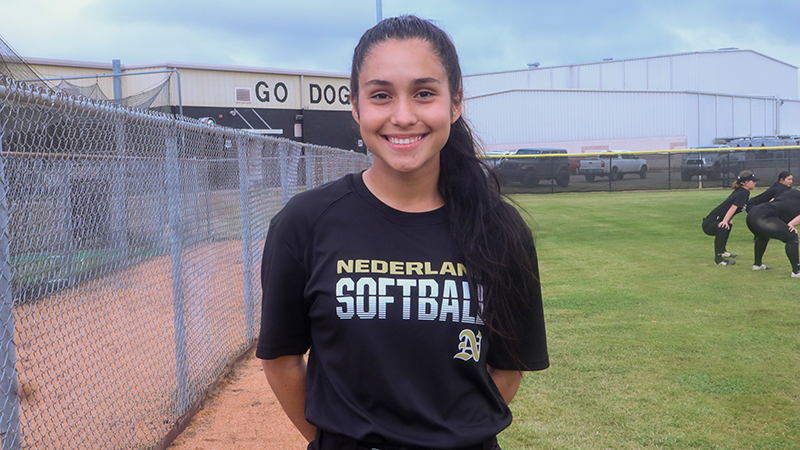 Alyssa Collazo has lived up to her softball coach’s expectations in her senior season at Nederland. (Chris Moore/The News)

“I’ve had a lot of freshman make varsity,” Mallette said. “She was the first freshman that I told in the middle of tryouts that she was going to make varsity. Done. It was done. The JV coach was mad at me. She was like, ‘I don’t get her any?’ Nope. Done. Sorry.”

Mallette said the senior was already a complete player in the ninth grade.

“She was a five-tool player,” he said. “She has it all. She has speed. Her defensive work is phenomenal. Her bat and arm are great. It really is everything. She is super smart on the field. Everything she does is technically sound. You just knew that she was ready to play right then and make in impact.”

Collazo remembers being nervous during the tryout.

“On the second day, he announced that I was for sure going to be on varsity,” she said. “That was kind of scary, but I was proud of myself.”

Collazo signed a letter of intent in December to play softball at Angelina College in Lufkin.

Mallette said Collazo has made an impact since she stepped on the field for Nederland.

“Besides when she was injured, you can easily count on one hand the number of games that she hasn’t started for us,” he said. “She has hit either third or fifth (in the lineup) her entire time in high school. That is what she is for us. I know what I am going to get — a fierce competitor that shows up every day, wanting to make everyone around her better. She is a super humble kid. In her mind she is just another player on the team, but she is a really, really important piece.”

“She can play any position,” Mallette said. “She told me she is a pitcher, but I don’t let her pitch. She keeps asking if she can pitch and I’m like, ‘No, you are good.’”

Collazo said she still wants to pitch against her coach’s wishes.

“I just want to,” she said laughing. “I’ve played just about every other position for this team. It would be awesome. When I was younger, I pitched. It would be awesome to show Mallette that I can pitch and I really want to do it. Maybe one day he will just put me out there.”

Collazo said catcher is the only position she hasn’t played.

“My favorite position is probably short,” she said. “I like to move a lot and dive for balls. I just like to go all out. A good short needs to be outgoing, fast and have good hand-eye coordination.”

Mallette said Collazo, who is relatively small in stature, plays big in the batter’s box.

See how young, rebuilding PNG softball is not planning…