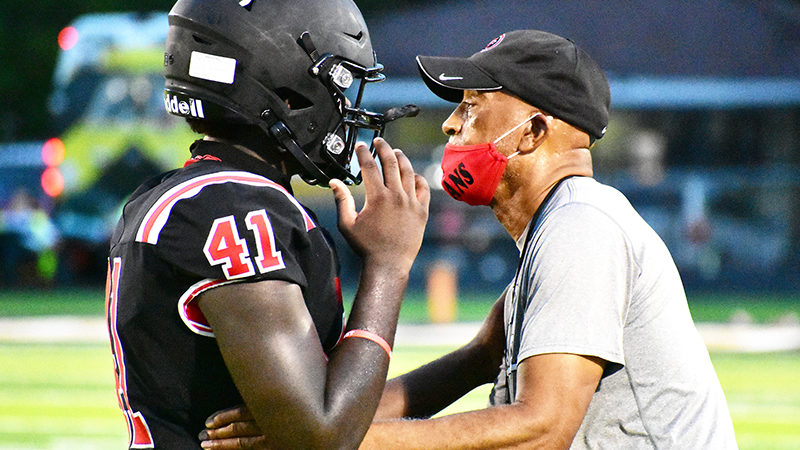 Memorial High School coach Dwight Scypion is seen giving instruction to a Titans football player. The veteran coach and Port Arthur native said he is committed to saving as many young people from the streets as he can. (I.C. Murrell/The News file photo)

Dwight Scypion is a competitor. As an athlete and coach for decades in Port Arthur, he hated losing more than he loved winning.

“I always had this attitude about myself,” he said. “I didn’t like to lose. Losing was a no-no for me. If I lost, I took it so hard to the point that I didn’t really talk to nobody. When I’m winning, I’m good.”

Most competitors will say that winning is a relief from losing and that the stronger emotion is tied to not being good enough. For Scypion, who is now a basketball and football coach at Memorial High School, losing comes at much higher stakes than a loss on the record.

“In the process of doing all of this stuff, I know I have touched the lives of a lot of kids,” he said. “Some of them I see. Some of them I don’t. I tried to save all of them. I knew I couldn’t, but I tried anyway. I know I saved more than the ones I lost. Some of the kids that I did lose hurt more than anything. I know I lost a few. I knew the direction they were going, but I kept pushing and trying my best to keep them from going. Once they really got out of these eyes, I lost them. When they were in these eyes, I kept on them. When they got away from me that was it. I think about those, the ones that I lost and tried really hard to hold on to.” 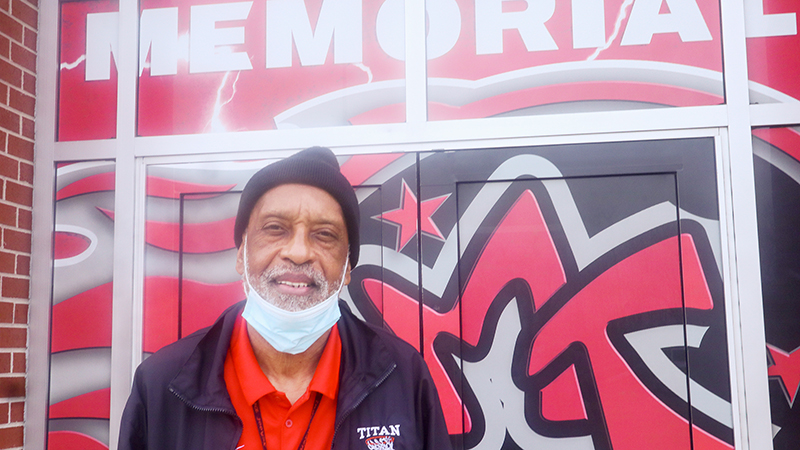 “It was fun,” Scypion said of his childhood. “We did a lot of things in the city and had a lot of friends. I had good, hard-working parents. My dad did all types of work and mom worked at Luby’s Cafeteria when it was out there in Jefferson City. She was the main salad maker. They raised us all to be the type of people we are today.”

While all of the boys played sports, Scypion’s completive side leaked out when asked who was the best athlete.

“I’ll put it this way,” he said with a laugh, “we all were on the same page, but I think it was probably me. I really do.”

He attended Lincoln High School before going to Jarvis Christian College and then to Lamar University and Prairie View A&M University.

Scypion earned his degree in Business Administration with a minor in Physical Education.

His journey to becoming a teacher and a coach had some pit stops along the way.

“It took a good while,” he said. “When I finished college, I came home and thought for sure that I was going to get off into some business and make good money. It didn’t work out. I started doing little jobs like being a supervisor at a furniture company. From there, I got into law enforcement. During that time, I started getting involved in Pop Warner leagues and being around kids. While I was a policeman, I started taking educational classes and it seemed like something I wanted to do.”

As an officer, Scypion said he felt like he was reacting to issues with children and not being proactive.

“I didn’t want to only interact with kids when they have done something wrong,” he said. “From there, as things began to materialize, my mind started focusing on the educational part. I was in law enforcement. I knew I could become a sub, still work in law enforcement and do the Pop Warner and it just kept pushing me more and more towards kids.”

That is when Scypion began doubting if teaching was what he was supposed to do. The rigorous testing process to become a teacher made him bullish to keep trying, he said.

“I went back to Jarvis to get more feedback on what I should do,” he said. “When I started actually doing it, I heard words in my head saying that this is what I need to do. I didn’t really understand it at first, but I realized it was God talking to me. While I was at Jarvis, I got two jobs. One was a scout for the basketball coach… As I started doing that, I was pushed more and more to being a coach.”

Scypion also worked as an administrator over the housing department, but spent most of his free time around the basketball program.

“When my son was born in ’92, I came back home and was hired as a permanent sub with the school district,” he said. “I coached basketball at Edison Middle School. I said ‘This is it.’ The direction that the lord led me was the direction that I started to feel good about. I didn’t want to do nothing else. I didn’t care if someone came and offered me a job for a lot more money.”

“That made me feel really at home,” he said. “There was one day I was at home going through some stuff from my high school days. I found a spiral from my history class. I was writing down all my goals. I said that if I didn’t accomplish these top goals, then I want to come back and coach at Lincoln High School. When that happened, everything made sense.”

Since being back in Port Arthur, Scypion has helped coached Lincoln and Memorial state championship games in football and basketball.

Those moments and students have brought him more joy than anyone can imagine and helped through difficult times, but the wins after the final whistle are the ones he cherishes the most.

“There was student that graduated from Lincoln,” he said. “We go to the same church. I used to work with his wife but I didn’t know it was his wife. We were all in church together and he told his wife, ‘this man right here kept me where I need to be. I wanted to do a lot of bad stuff. I wanted to quit football, but he told me I couldn’t.’ I told him that I wasn’t going to let him quit football because I wasn’t going to lose him to the streets. He’s doing great now.”

For more coverage, check out https://www.panews.com/2021/02/12/black-history-month-pat-avery-breaking-barriers-paving-way-for-others/

For more coverage, check out https://www.panews.com/2021/02/05/black-history-profile-commissioner-sinegal-remains-close-to-history-while-moving-forward/