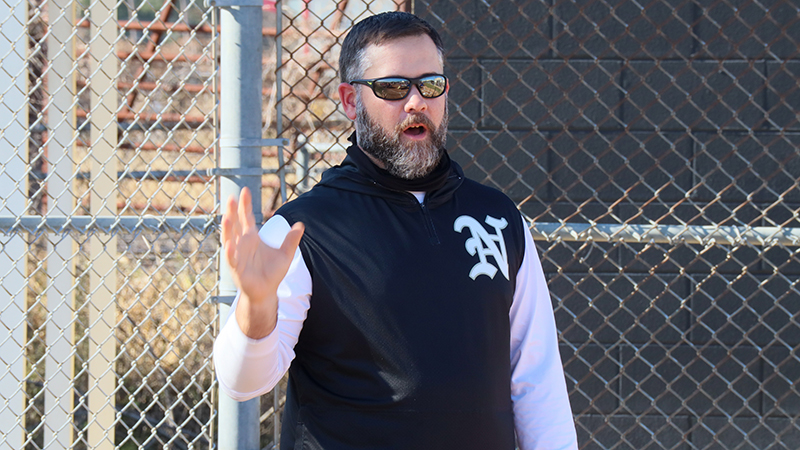 Nederland head coach Will Mallette said he is proud of the camaraderie the team has developed. Chris Moore/The News

NEDERLAND — Last year, and injury-riddled Nederland softball team limped into spring break with a 5-15 record. The coronavirus pandemic ended the season prematurely, but this year, the Bulldogs are hoping to keep alive a tradition of approximately 20-consecutive years on playoff appearances.

After defeating Lumberton 5-4 in their most recent matchup, Nederland head coach Will Mallette said his team is looking good.

“We were missing three varsity players,” Mallette said. “One was a pitcher. We essentially had one pitcher and a couple of JV kids throwing. The varsity pitcher that was up won all four games.”

Mallette is anxious to see all of his returners from last year’s young team.

“Alyssa Collazo is a senior,” he said. “She is playing shortstop. She is one of the cornerstones of the team. She was very hungry to come back. Her sister, who is a sophomore, is hitting leadoff for us. Her name is Briana. I think she is leading the team in batting average.”

Mallette said the varsity has three sets of sisters, and there are a few more sibling sets on JV.

“They are there for each,” he said of the siblings. “They are just like good teammates. A lot of times, you see sisters fight, but they don’t do that here. I don’t know how they are at home. Out here they support each other and hold each other accountable.”

The coach said the family vibe is what makes Nederland unique.

“Most of these kids grew up watching Nederland softball,” he said. “One of my assistants played for me and then went to HBU and Lamar PA and then started at Lamar for two years. Now, she has made it full circle. There are times she tells the girls ‘That is not how we do it,’ and it is not from a coaching staff perspective. She is speaking as a player and about the tradition. That is really cool.”

One of the Bulldogs’ greatest assets this season is their depth.

“It has blown my mind,” Mallette said. “It is pretty unique in my 15 years of coaching. Everybody trusts everybody to do their jobs.”

As opposed to focusing on large goals, Mallette has his players focus on small goals throughout an inning.

Every inning, they have a goal.

“On defense, we look at not having multiple errors,” he said. “I always say that we can’t let our errors have babies. They make fun of me for that. If we have two errors, we have runs scored. On offense, it’s just getting a run this inning and having quality at-bats. You always keep the big goals in the back of your head. We want to keep up the streak of being in the playoffs. That is always a goal.”

He said he is proud the program expects to be in the playoffs each year.

“At the end of the season, you’ll see a team that has lost and they will have girls in the outfield for 20 minutes and our girls will ask why they are still there,” he said. “They don’t realize that was the end of their season. Some of those girls will never play again. We have an expectation to be in the playoffs and keep playing. We have a tough district and it is going to be a battle for sure, but we are just trying to win today.”