Playoff game postponed — Bulldogs try to heat up before postseason 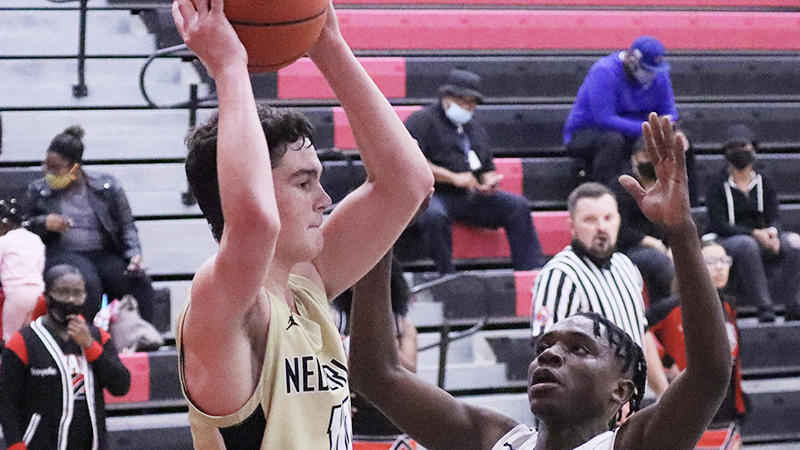 Tripp Parker (10) searches for an open teammate during the Bulldogs’ 56-50 win over the Titans at Memorial High School Feb. 9. (Chris Moore/The News)

NEDERLAND — On Wednesday, while many residents were still scraping ice, head coach Brian English was scraping together enough players to run a practice prior to his team’s bi-district round playoff game against Goose Creek Memorial.

Nederland’s game against GCM, which was originally scheduled for today, will be played at East Chambers High School at 7 p.m. Monday.

On Thursday, the players were in the gym trying to shake off the rust

English said the latest winter storm provided a unique challenge. Normally during time off, his players can go outside and shoot on a rim at the house.

“They were tired and beat (in practice),” English said. “They looked like they had been lying around for four days. I think they had been. It wasn’t pretty.”

Nederland leading scorer Tyler Jackson said he is eager to play, adding this week is another hurdle the team must overcome.

“We just had to stay busy, even though there isn’t anything we could really do about the weather,” he said. “It has been a crazy year. We just have to push through it. There is a little rust. We have been sitting down in the house for way too long without basketball. We are going to get some shots up and work hard.”

Goose Creek Memorial finished the season 21-3 and 14-2 in district. Its only district losses came against Manvel and La Porte. GCM has not lost a game since Dec. 18 and is ranked No. 24 in the state.

“They are well rounded,” English said. “They have some good guards and some good bigs. Their style is a little different. It is going to be a challenge, but hopefully, playing the guys we did in district is going to help us out.”

The Bulldogs finished third in District 21-5A behind Crosby and Beaumont United, which went undefeated on the season. The Timberwolves are ranked No. 2 in the state.

Nederland wrapped up its regular season with a 45-47 loss to Crosby a week ago. English said GCM is similar to the Cougars.

“Except they don’t have a guy that can go score 30 every night,” he said. “They are well rounded. They are going to be a challenge for sure.”

The head coach said all of the players and coaches are experiencing similar living conditions as it relates to water and electricity.

“The water issue is something that we probably haven’t experienced before,” English said. “That is probably why we are not getting to play Friday night.”

Jackson said he is ready to prove to the rest of the state that the Bulldogs are contenders.

“I’m very excited,” he said. “I am ready to go deep, deep. We are the underdogs, and we have to show them that we are going to go far.”