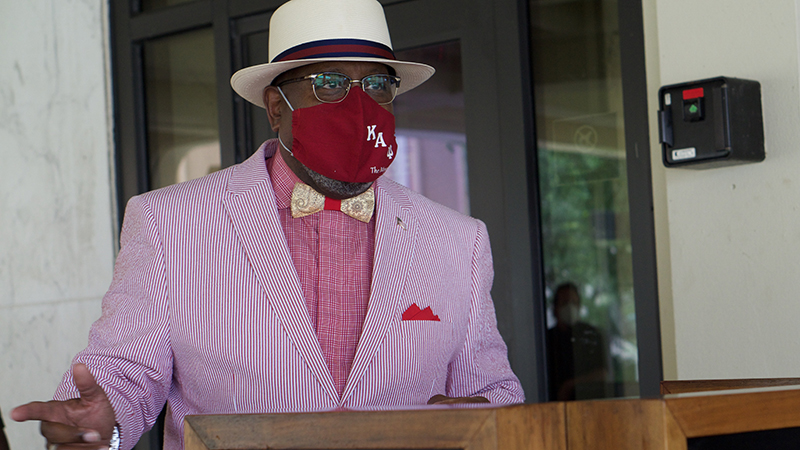 Port Arthur Mayor Thurman Bartie addresses members of the press during a conference in front of City Hall in 2020. (Cassandra Jenkins/The News)

There are busted water lines across Port Arthur, including a 36-inch line from the water plant to Cheniere Energy in nearby Cameron, Louisiana.

Port Arthur Mayor Thurman Bartie said crews have been working on the break since Cheniere discovered it on Wednesday. But first they had to find a way to get to Pleasure Island and the leak.

So, the Texas Department of Transportation used a device to de-ice the Martin Luther King Jr. Bridge, which allowed city crews and independent contractors to the site to work on the line.

Eban Burnham-Snyder, vice president of public affairs for Cheniere Energy, confirmed there was a disruption and was told it is along Texas 82 on Pleasure Island.

The facility site is not impacted by the water line break.

Burnham-Snyder said repairs would likely be coordinated by the City of Port Arthur Water Department.

The water line from the city to Cheniere has been in place for a number of years and was a record-setting project that runs under a flood control levee, railroad tracks and the Sabine-Neches Waterway, according to Laney Directional Drilling, which took part in the project.

Bartie said the city’s water treatment plant is producing water but can’t get it to customers due to the water line breaks.

“There’s the 36-inch break and all of the water breaks around the city in different areas are affecting water being received by customers,” Bartie said. “It’s difficult to build up enough pressure.

Bartie asks residents to be patient.

“We’ve never had this before,” he said. “We don’t have a playbook to go back to and do this, this, this. Please be patient. Let’s thank God there are good predictions to be in the 70s and no rain and crews can go out.”

The winter storm and associated snow and ice were an act of nature and not something the city’s infrastructure is made to deal with.

City officials said Port Arthur Water personnel are continuing to look for major and minor leaks in the city. Crews are patrolling to spot leaks, especially ones in uninhabited areas. The Water Purification Plant is pumping at maximum, and “we are not able to maintain system pressures,” city officials said.

“The more eyes looking for leaks the better, so we encourage citizens to check in and around their property and neighborhood for leaks and call (409) 983-8550 to report,” the city said. “If you find the phones are busy, please keep calling. Citizens can also email Trinell Smith at trinell.smith@portarthurtx.gov or Trina Bendy at trina.bendy@portarthurtx.gov, but please use these email addresses for leak reports only.

Local stores have been unable to receive deliveries, so many stores are out of staple items such as milk, bread and bottled water.

To top it off, many people do not have running water in the city.

“It’s very stressful for me having a newborn that requires water for cleaning and her actual formula,” Holly Peddy said. “I’m having to make sure I don’t run out for her sake.”

Jody Holton said she never would have imagined gathering ice to melt to fill the toilet tank to flush.

“We are prepared with bottled water to drink, but not this,” Holton said.

Cindy Meaux was on her third day of no water on Thursday. She said it’s stressful not having water, and having rheumatoid arthritis makes it difficult to try to gather water from a ditch or melt snow.

Doneane Reese had family from Port Neches, who was without water and power, that came to her house when her own water went out. Her first thought was “how do we give our toddler granddaughter a bath?”

Mary Touchet and husband have sporadic water — a trickle sometimes and nothing at other times. She keeps her bathtub filled as much as possible to flush the toilet and keeps an emergency stash of bottled water for when needed.

The mayor said if the 36-inch line is repaired, it would help the city get water to customers that still have working water lines.

Estimates for a complete water return are still unknown.