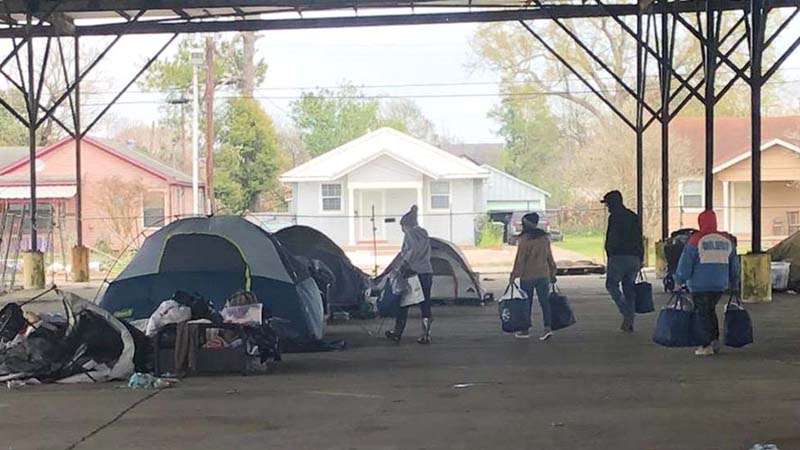 Local churches and city officials donated blankets and other items to homeless individuals on Sunday in preparation of the winter blast. (Courtesy photo)

But even with the record low of 16 degrees — temperatures in Port Arthur rose to 19 degrees by 9:30 a.m. Tuesday — local law enforcement didn’t report any major traffic accidents.

Port Arthur Police Chief Tim Duriso said he hadn’t seen much as far as traffic crashes, adding police are keeping an eye on the roadways.

“Conditions appear to be getting better, the sun is shining now,” Duriso said.

On Sunday, Mayor Thurman Bartie asked some city workers to issue blankets to those in need. They had the help of some churches from Port Arthur and one from Nederland.

The city manager and some councilmembers came out to help, some using their own money to buy needed cold weather items, Duriso said.

Other local individuals also took part in the effort.

They ended up giving away 200 blankets, but the time set aside for the giveaway ended before organizers ran out of blankets.

“They were not in high demand on Sunday,” Duriso said.

Nederland Police Chief Gary Porter noted Entergy’s rolling blackouts — some of the city was without power Tuesday morning. He imagined there were some cold people in some parts of town.

As for the condition of the streets, they were worse Tuesday than the day before.

Porter did note several people on ATVs acting irresponsibly and the city had power outages.

“It’s a tragedy waiting to happen,” Porter said. “People think because they’re having fun that ATV’s are not dangerous. Pulling someone behind, they can’t calculate how far they will sling out. It’s a good way to get a kid killed and a good way to get criminally prosecuted. Just because it’s an ATV doesn’t mean they can’t face criminal penalties when fun goes bad.”

Porter said people should to stay off ATVs and not let the urge to have a little fun cloud their judgment.

Port Neches Police Chief Paul Lemoine spoke of the rolling blackouts leaving residents without power and of the road conditions.

The roads are icier Tuesday than they were Monday, Lemoine said, and a lot slicker. The main roads where there are trails from other motorists have been traveled enough in some places that tire meets pavement but side roads are solid ice.

The kayaker wasn’t paddling the waterways but had placed a kayak at the top of a hill at Port Neches Riverfront Park, ran and jumped into the kayak and slid down the hill.

Texas Department of Public Safety is urging all citizens to avoid using recreational equipment — such as skis or sleds — on public roadways, bridges and overpasses, according to information from DPS Sgt. Stephanie Davis.

“Vehicular traffic and first responders are still utilizing many roadways, and the poor driving conditions significantly increase stopping distance and a driver’s ability to steer away from danger,” Davis said.

Southeast Texans are being urged to stay off the roads unless completely necessary, Allison Getz with the Jefferson County Office of Emergency Management said.

As of mid-morning Tuesday there were two 18 wheeler crashes in Chambers and Orange counties, she said adding people should stay home if possible.

In Orange County, an 18-wheeler jackknifed on I-10 eastbound at Simmons Drive causing all lanes to be closed. Icy conditions are still present and travel is discouraged. If you must travel, please visit DriveTexas.org for current road conditions.