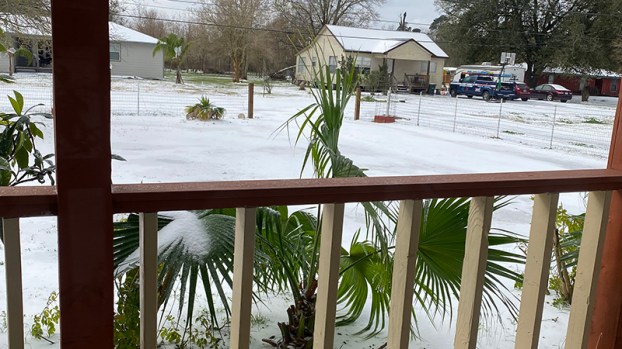 The view from a home in Port Acres shows snow and ice accumulation Monday morning.

From the rare thunder sleet phenomenon to record breaking lows, this winter storm is one many will likely remember for years to come.

Southeast Texans woke up to a covering of ice and snow Monday, and temperatures aren’t expected to rise out of the 20s.

National Weather Service-Lake Charles Meteorologist Andy Tingler said there would likely still be flurries in Jefferson and Orange counties until at least midday Monday, when all precipitation comes to an end.

Monday’s lows are forecast to be in the teens to around 10 and with wind chill, the temperature will feel like zero to 5 degrees.

Tuesday’s temperatures will get to about freezing, but it will be dry and the region may even feel a bit of sunshine, Tingler said.

By Wednesday, temperatures should warm up to the 40s to 50s but there is an 80 percent chance of rain as another front moves in.

“It won’t be the same kind of system,” Tingler said of the next wave of cold weather. “Before sunrise there will be freezing rain that will leave a thin coating.”

This accumulation of icy precipitation will likely melt if the sun comes out but not where there’s shade. And what little that does melt will refreeze.

Travel will be impacted for days to come.

Currently, bridges in the area are closed per the Texas Department of Public Safety.

Lance Billeaud, Fire Chief/ Emergency Management Coordinator for the City of Groves, asks the community to stay off the roads if at all possible.

“They are icy and will not be in good condition to drive on until the ice thaws,” Billeaud said. “This will not occur until we get above freezing, which may not be until Wednesday afternoon. If you do have to get out, drive very slowly, 10 – 15 mph and avoid bridges and overpasses. Please stay warm inside your residence and check on your neighbors.”

Comparing to past winter storms

The ice storm of 1997 was one for the record books, when ice-laden limbs fell, power was out and roads were unsafe. The current winter storm is a different type of event.

“With the ice storm of ’97 we had an inch to a inch and a quarter of ice — we had more ice back then; however, we weren’t as cold,” Tingler said. “Temperatures were barely above freezing then it was warm for a few days. This cold (current) is as cold as ’89 but the duration was longer.”

Records to be broken, shattered

The record for the Beaumont/Port Arthur area for Monday is 25 and as of mid-morning the temp was 21 so that’s one record broken, he said.

Tuesday’s high is forecast for 25 as well and with the temperatures forecast as 10 to 15 degrees, the record won’t just be broken but shattered, Tingler said.

The all time record low for the Beaumont/Port Arthur area for February is 10 degrees in 1906.

The Medical Center of Southeast Texas is prepared to battle the coronavirus pandemic in the midst of the winter storm.... read more