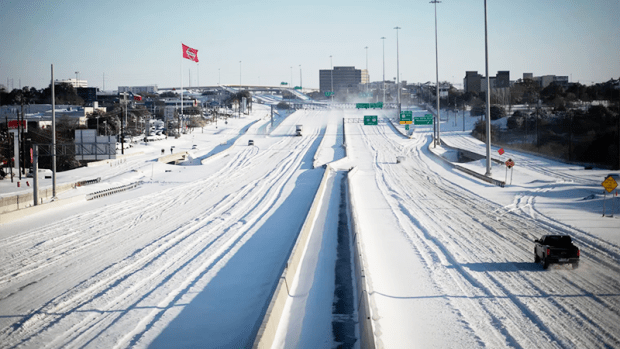 Interstate 35 near Stassney Lane in Austin was blanketed with snow on the morning of Feb. 15. A major winter storm affected the entire state of Texas. (Miguel Gutierrez Jr./The Texas Tribune)

The state’s electric grid operator lost control of the power supply Monday morning as 2 million Texas households didn’t have heat or other electric appliances working at home as a massive winter storm delivered freezing temperatures across the state.

When the state’s grid operator, the Electric Reliability Council of Texas, began implementing rolling blackouts at 1:25 a.m. Monday, the outages were intended to be implemented on a rolling basis — up to 45 minutes per affected area, according to the ERCOT.

Instead, some Texans in Austin, Houston and other cities were without power into Monday afternoon and all morning since even before ERCOT called for the rolling blackouts. And some companies that deliver electricity to households and businesses have told customers to expect to be without power through at least the end of the day as they work to restore power generating units that went offline during the storm.

“Unfortunately, if you are a customer who is currently experiencing an outage, you should be prepared to be without power for at least the rest of the day,” tweeted CenterPoint Energy. Houston Mayor Sylvester Turner said midday Monday that more than 1.1 million CenterPoint customers were without power.

Jackie Sargent, the general manager for Austin Energy, said Monday afternoon that based on information from ERCOT, the local power outages could extend into Tuesday afternoon.

“We are aware of where our system is at and we are operating with the constraints and the direction of ERCOT,” she said. “ERCOT has said that based on what they are looking at that, this situation is likely to continue through the night and possibly into the afternoon tomorrow. So it depends on what we do as consumers in managing our load, our consumption of electricity.”

Some of the energy sources powering the grid were knocked out by the inclement weather, most of which were facilities run by gas, coal or nuclear energy.

“Most of the plants that went offline during evening and morning today were fueled by one of those sources,” said Dan Woodfin, senior director of system operations at ERCOT.

Wind turbines, which provide a much smaller source of energy for the state’s power grid, were iced over and also out of commission.

The storm that hit Texas is rare for both its scope and its intensity. On Sunday, the National Weather Service issued a winter storm warning for all 254 counties. Cities like Dallas and Austin had temperatures in the single digits Monday morning. Close to the coast in places like Houston and Corpus Christi, the weather was in the teens.

ERCOT announced Sunday night that it had set a winter record for power demand, reaching 69,150 megawatts between 6 and 7 p.m. ERCOT said Monday morning that 30,000 megawatts of power generation had been forced off the system. The grid operator also said it would provide an update at 10:30 a.m. Central time Monday.

The storm has shut down much of the state. Numerous roads are iced over, many schools have closed and, at Gov. Greg Abbott’s request, President Joe Biden declared a federal emergency declaration across the state. — Mitchell Ferman and Sami Sparber

Several cities across the state have opened emergency shelters for residents without homes. In Dallas, the Kay Bailey Hutchison Convention Center opened on Friday to 300 people, and will remain open as long as temperatures are below freezing, reports NBC DFW.

The George R. Brown Convention Center and Lakewood Church in Houston opened as warming centers Sunday. Houston set up 500 beds inside the convention center and allowed pets. But on Sunday night, Houston Mayor Sylvester Turner said in a tweet that the center was nearing capacity. Turner said residents who need access to a warming center should call 311 or 211 to be directed to one of the several shelters in the city.

In Austin, a warming center opened on Saturday at Palmer Events Center. Austin officials said single adults in need of shelter should report to the Central Library and that families should go to the Downtown Salvation Army Shelter, reports KVUE. Several community organizations in San Antonio are stepping up to help unsheltered residents with a place to stay, food or supplies to keep warm.

— By The Texas Tribune is a nonpartisan, nonprofit media organization that informs Texans — and engages with them – about public policy, politics, government and statewide issues.

From the rare thunder sleet phenomenon to record breaking lows, this winter storm is one many will likely remember for years... read more