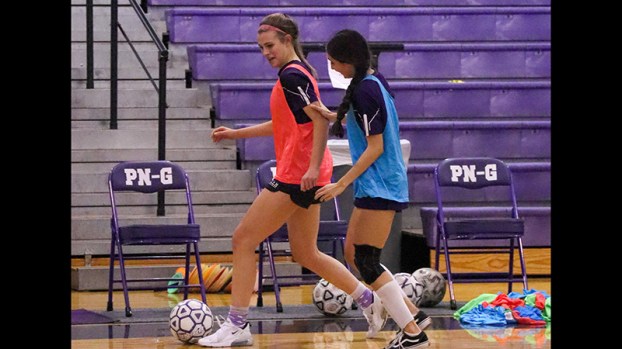 PORT NECHES — While the Port Neches-Groves girls soccer team is off to a hot start to the district season, the team is not expecting the upcoming freeze to cool them off, though they are taking precautions.

On Thursday, the team practiced indoors before going outside only to give the goalies some hands-on practice. However, Bates said the session was cut short due to rain.

“The only ones we brought outside were the goalkeepers to get a couple of live shots because she were really working on angles,” Bates said. “As soon as we got out there, the bottom dropped out. When it’s cold like this, we stay in more. We look at film, talk about game plans and do a lot of team building. It does change what we do.”

Bates said the district was discussing the possibility of moving Tuesday’s scheduled matchup against Memorial back one day to Wednesday, which is forecasted to be the coldest day of the week with high of 34 degrees and a low of 16 degrees.

Bates said she is proud of how her team is battling through the season.

“I absolutely love this team,” she said. “I am excited about them. They are a blast to train. They come to practice every day motivated to get to work. They play beautiful soccer and have great ideas.”

The coach said her team’s greatest strength is finding ways to succeed even when everything is not going its way.

“Even when we are not playing beautiful soccer, they are gritty,” she said. “They are not afraid to get dirt under their nails, you can say. They have a variety of tools they can bring out during the game.”

Bates said PNG’s 3-2 overtime win over Barbers Hill is a perfect example of her team finding a way to win.

“There are times when things are off or just not working,” she said. “You have to be gritty enough to find a way to get past that. This team has that and I love it. In that overtime win we could just not complete a pass to save our life. Usually when we get reports back, we are at about 60-70 percent possession and that was not the case. We just could not connect. We went to battle, out-muscled them and found a way to put the ball in the back of the net.”

Prior to its game against Galena Park, PNG had outscored district opponents 22-2 in four games.

The Nederland girls basketball team fell 77-44 to Manvel in the bi-district round of the 5A playoffs Thursday. The Bulldogs... read more