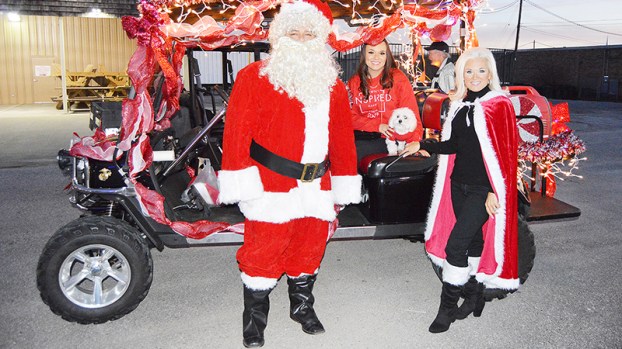 Brian, Kelsey and Dawn Swindel are seen in December by their golf cart before the 3rd Annual Christmas Golf Cart Parade in Nederland, hosted by the Nederland Economic Development Corporation. (Stephen Hemelt/The News)

NEDERLAND — You must have a license plate on your golf cart to legally operate it on city streets in Nederland.

The city council voted this week to update its ordinance saying such; however, the move was largely procedural to match guidelines required by the State of Texas and passed in September of 2019.

Much of the talk among city council members and administrators at this week’s meeting focused on golf cart safety, with City Manager Chris Duque noting there are too many times when children are driving the golf carts or parents are resting young children on their laps while on the golf cart.

Officials stress the goal is not to ticket residents but to make things as safe as possible.

Golf carts are allowed, and to legally operate one in the City of Nederland:

Following this week’s council meeting, some residents questioned the necessity for such an ordinance, noting children often operate golf carts with their parents’ permission and in front of law enforcement.

According to Duque, enforcement of golf cart rules has been discussed at the police department, and he asks residents who see children operating them to report it to police.

“There are only so many police officers on any shift,” he said. “They can’t be everywhere all the time. If people see something, if they can report it to the police department, hopefully we can find those kids doing that and take corrective measures.”

According to the state law requiring golf cart license plates, those interested can obtain them from the county tax assessor-collector’s office.

To operate legally, all golf carts must be equipped with the following, which must continuously remain in working condition: Two headlamps, two taillamps, side reflectors, parking brake, rearview mirror and a slow-moving vehicle emblem with reflective surface.

NEDERLAND — A Beaumont man with numerous theft and robbery convictions is believed to have walked into a Nederland convenience... read more