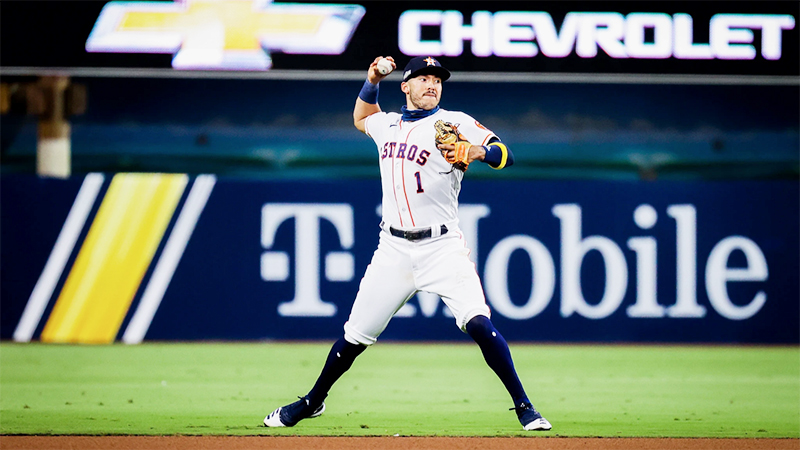 Carlos Correa makes a throw from shortstop during the 2020 ALDS Game 3 vs. the Rays.

HOUSTON — The Houston Astros  announced their start times for the 2021 regular season.

Information on fan attendance and ticketing for the 2021 season will be announced at a later date.

The 2021 schedule will once again feature 76 matchups vs. American League West opponents. The Astros, who finished second in the AL West in 2020 behind the A’s, will face Oakland nine times in Houston in 2021, including for the final three regular season games, Oct. 1-3.

The Tampa Bay Rays, who eliminated the Astros in a thrilling seven-game American League Championship Series last season, will also be in Houston on the final week of the 2021 season for a three-game series, Sept. 28-30.

The Astros and rival Texas Rangers will once again battle in the Lone Star Series for the Silver Boot, with Houston hosting the Rangers for three different series in 2021, totaling nine games at Minute Maid Park.

The Los Angeles Angels of Anaheim, featuring one of baseball’s best players in Mike Trout and future Hall of Famer Albert Pujols, will visit Houston for four games in April (22-25),  three games in May (10-12) and three more in September (10-12).

The defending World Series Champion Los Angeles Dodgers return to Houston for the second consecutive season for a two-game set, May 25-26. During that same homestand, the Boston Red Sox will also visit Minute Maid Park for a four-game series, May 31-June 3.

For Interleague Play, the Astros face the NL West for the second consecutive season, with the San Diego Padres, Colorado Rockies, Arizona Diamondbacks and Dodgers scheduled to visit Houston in 2021.