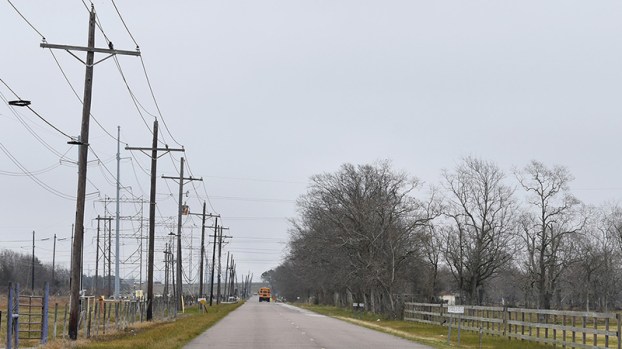 A mix of industrial sites, such as pipeline laydown areas, an Entergy substation and acres of land with cattle amid heavily wooded areas sits on either side of 60th Street between Ninth Avenue and Twin City Highway. A woman was kidnapped Thursday and located in this vicinity, police said. (Mary Meaux/The News)

Police are continuing to gather evidence following last week’s aggravated kidnapping of a woman that took place in broad daylight.

Port Arthur Police Det. Mike Hebert said the crime is considered “aggravated” because the assailant had a weapon when he entered the victim’s vehicle in the 3600 block of Texas 73.

Police are not disclosing the type of weapon used in the 1 p.m. Feb. 4 kidnapping.

Police believe a male brought the woman to a wooded area north of 60th Street, where she was recovered by one of the department’s patrol officers.

Police said they received a call from a third party that alerted authorities to the abduction. No further information regarding the call is being released.

There was no large-scale search for the victim as the patrol officer located her quickly, Hebert said, adding the officer was the first unit to respond and the first to locate the woman.

Hebert said the PAPD could not release other descriptions of the crime or details of the woman’s injuries.

“She was taken to a local hospital to be evaluated. Her injuries were not life-threatening,” he said.

No arrests have been made in the case as of Tuesday afternoon.

Police are being sensitive with the case so as not to re-victimize the abducted woman.

“We do not want to compromise the integrity of this investigation,” Hebert said. “This is still a fluid incident. Evidence is still being gathered, and we cannot compromise this case.”

If you have information, call the Port Arthur Police Department at 983-8600 or Crime Stoppers of Southeast Texas at 409-833-TIPS. You won’t be asked your name and may be eligible for a cash reward. You can make an anonymous tip to Crime Stoppers by downloading the P3 Tips app on a smartphone.