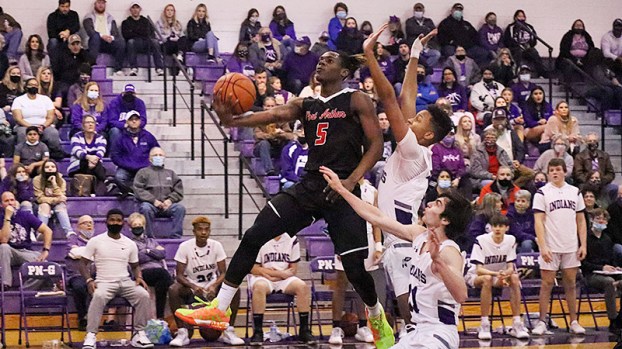 Maleek Jones goes for a layup during the first half of the Titans' 52-49 win over Port Neches-Groves on Friday night. (Chris Moore/The News)

PORT NECHES — A late three by Bryton Willice gave Memorial a 52-49 win over Port Neches-Groves on the road Friday night.

With fewer than 10 seconds remaining in the game, Willice came off a high screen at the top of the key and drained a dagger to end the Indians’ hopes of advancing to the post season.

The Titans were a half game behind Barbers Hill, who occupied the fourth seed in District 21-5A. The Eagles played undefeated Beaumont United.

The Titans jumped out to an early 18-13 lead at the end of the first quarter. PNG’s Brady Nail hit a buzzer-beating three to give the Indians a 30-27 lead at the halfway mark.

The two teams exchanged baskets in the third with Memorial leading the way 38-37 going into the fourth quarter.

With a couple of offensive rebounds and put backs by Maleek Jones, the Titans extended their lead to 49-42 with 3:53 left in the game. PNG’s Grant Pearson capped off a 7-0 run by sinking a free throw to tie the game.

The Indians had a chance to take a late lead but an arrant pass fell out of bounds, setting up Willice’s game-winning jumper.

Pearson and Nail finished the game with 16 and 13 points, respectively. Memorial’s Keandre Jones led all Titans scorers with 15 points, including four threes. Maleek Jones finished with 14.

When the Memorial and Port Neches-Groves boys basketball teams match up Friday night, players on both teams know a shot... read more