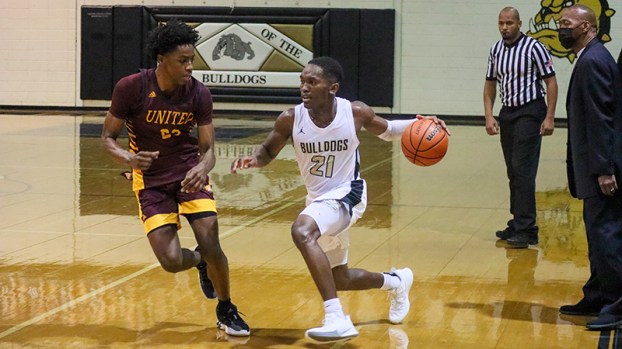 Nederland’s Joseph Gipson (21) looks for driving room during the Bulldogs’ 51-29 loss to Beaumont United at the Dog Dome on Friday. (Chris Moore/The News)

All three local boys basketball teams are in the playoff mix as of Tuesday afternoon.

If Port Neches loses to Crosby Tuesday night, they are out of the conversation. If they won, it sets up a huge game against Memorial next week.

The Titans, who are in the No. 4 spot, have a rigorous schedule, playing at Port Neches Friday, hosting Nederland Tuesday before finishing up the season at Beaumont United Feb. 12. The top four teams make it to the playoffs.

“It’s very important for us to win as many of these last few games as we can,” Memorial head coach Alden Lewis said. “That will determine the playoff picture. My guys know what is at stake. We control our own destiny. If we win the games we are supposed to, we will be in.” 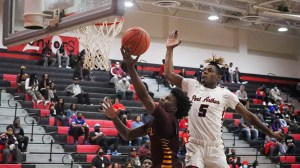 Memorial’s Maleek Jones (5) soars for a chase-down block in the first half of the Titans’ 73-43 loss to Beaumont United at Memorial Stadium Tuesday. Chris Moore/The News

Lewis said his players are aware they have an uphill battle going against two of the top teams in the district in the last three games.

Lewis doesn’t want to get into a position where he has to rely on another team to lose for the Titans to get into the playoffs.

“We need to win as many games as we can,” he said. “If one slips, it shouldn’t hurt us, but we need wins. We want to control our own destiny. We don’t want to put it in anyone else’s hands.”

PNG helped out the Titans last Friday with an overtime win over Barbers Hill. The Eagles’ loss gave Memorial a half-game lead.

“We need some help, but if we take care of business, we have a shot for a play-in game,” he said. “If we win out, that gives us a great shot.”

Smith said his team is treating the end of the season like the playoffs.

“If we keep winning, we prolong our chances,” he said. “We can at least get a play-in game, which would be unbelievable with the COVID season and everything. Our kids are still fighting and that shows a lot about their character. We know what is on the line.”

Smith said his players can’t let the confidence from PNG’s 48-41 win over Barbers Hill go to their heads.

“They came in with a little swagger, knowing that all of their hard work is finally coming together,” he said. “Confidence is the key. It’s still just one win. It was a big win, but just one win. We need multiple wins to give us a shot.”

The Bulldogs, who sit in the most favorable spot of all of the potential playoff teams, play Galena Park Friday before taking on Memorial and Crosby to wrap up the regular season.

Galena Park has yet to win a district game. If the Bulldogs and Crosby win out, they will play for the second seed next Friday.

NEDERLAND — Nederland’s chances of making the playoffs for the second-straight year dramatically increased with a 49-37 win over rival... read more