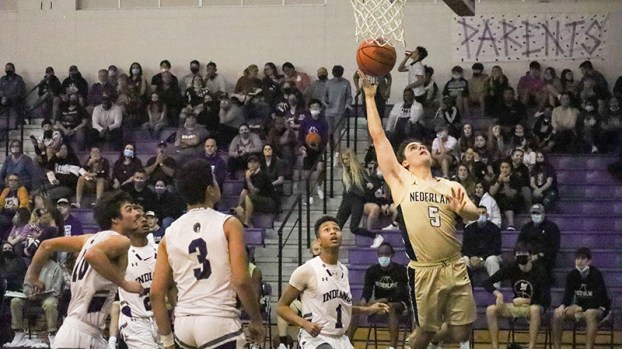 Nederland’s Josh Provost (5) drives for a layup in the Bulldogs’ 38-30 win over the Indians at Port Neches-Groves High School Jan. 22. (Chris Moore/The News)

Bulldogs ready for round 2 against undefeated Timberwolves

NEDERLAND — The undefeated Beaumont United Timberwolves handed the Nederland Bulldogs their first loss of the season in a lopsided game Jan. 5. The game was the first of two losses the Bulldogs suffered in the same week and remain the only two defeats for the black and gold on the season.

At the time, Nederland saw the game as a litmus test for the Bulldogs measuring up against one of the state’s best teams. The 65-33 result in favor of the Timberwolves did not sit well with the Bulldogs, who felt they played beneath their potential.

The two teams play again Friday. Tipoff is set for 7 p.m. at the Dog Dome.

“We had a tough week a couple of weeks ago,” Nederland head coach Brian English said. “We dug ourselves out after we got backed into a corner.”

English said his team had to look in the mirror and learn from its mistakes.

What followed were some good practices.

“They’ve done well with showing up on time and working hard,” English said. “That is really all you can do. You know you are pretty good and hope you can get it back. I think we got it back a little bit.”

English said his team’s ability to bounce back after the tough week says a lot about his players’ characters.

The Bulldogs won four straight, with the most recent victory coming in a sloppy 38-30 win over rival Port Neches-Groves last week.

“We got beat by a total of 50,” English said the bas week. “You get one win under your belt and go back to work. That is kind of like life. You get down and get yourself going again.”

In the last meeting, the Timerwolves’ height and length overwhelmed the Bulldogs, who had several turnovers that went for easy baskets in transition.

“They don’t have a lot of weaknesses,” English said of BU. “All five kids can score the ball and they play hard defensively. You have to take care of the basketball and you have to control the tempo. You have to make shots, because you are not getting a lot of offensive rebounds and second-chance opportunities. If you do that and hang around, who knows what might happen. That is our plan. That is what we have to do.”

Over the Bulldogs’ winning streak, players outside of go-to Tyler Jackson and Joseph Gipson have made considerable contributions.

Against Galena Park, Paxton Packman totaled 15 points, while Tripp Parker added eight points against PNG. English said the team’s shooters will have to step up and make big shots Friday.

“What we are hoping now is that both (Packman and Parker) show up at the same time,” English said. “That will give us an extra scorer besides just having three. Who knows? Someone might come off the bench and do it. More than anything, we’ve seen them and heard about them. You know what is coming. You have to be ready for them.”

The Port Neches-Groves boys soccer team is off to a scorching start this season. Along with sporting a 12-0-1 record,... read more