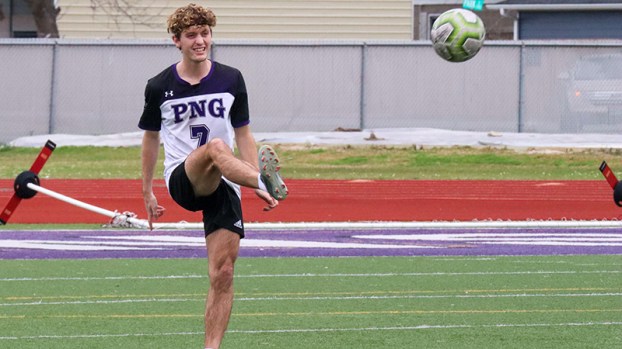 PNG's Jason Lovejoy recently broke the record for most goals in a career. Chris Moore/The News

The Port Neches-Groves boys soccer team is off to a scorching start this season.

Along with sporting a 12-0-1 record, PNG’s leading scorer Jason Lovejoy recently broke the school record for most career goals.

The previous record was 93 goals, set by Preston Riggs during Lovejoy’s freshman season. Lovejoy, now a senior, sits at 99 made goals heading into a match against Crosby next week.

“That would mean everything,” the senior said of the prospect of reaching triple-digit goals. “I’ve been playing soccer since I was 5 or 6 — ever since I can remember. My sister played soccer and my dad loves soccer.”

Lovejoy began to hone his skills against family members in friendly but competitive competitions.

“I think (my family) would say I’m the best player,” Lovejoy said. “My sister might put up an argument.”

The highlight of Lovejoy’s career so far is winning a district championship his sophomore season, he said.

“We weren’t sure if we were going to win it or not,” he said. “We were depending on another game that was happening. We were riding the bus after our last game and we got the call that we won and the whole bus erupted.”

Lovejoy said his first goal came at The Reservation against Ozen his freshman year.

The sharpshooter said his longest goal came from nearly 40 yards out and his favorite goal was a header from a free kick.

“The free kick was from midfield,” he said. “He kicked it and I headed it from the box. It was insane.”

“He’s up to 98 assists, I think,” Luttrull said of the senior. “He’s excelled at it his whole life. He plays the game at a very high mental rate, too, as well as a physical rate.”

Lovejoy believes he sees the game differently than most since he has played for so long.

“You have to be willing to share the ball with other people,” he said. “I’ve played so many soccer games, I think I can see a bit more than some other people.”

“He was junior captain last year for us, but he has grown,” he said. “He’ll take charge on the field. If things aren’t going right, he’ll try to verbally encourage kids to do things. When he gets the ball, everyone is paying attention.

“He’s doing some great things for us. We have a pretty good leadership group. Tate Sandell and Jesus Maldonado, they are a pretty powerful attacking trio.”

Luttrull said his team’s defense has played well, too.

“We gave up some goals in the tournament this past weekend, but they have been pretty stingy all year long,” he said. “They’re itching to get to finish the year. They felt robbed of their year last year by not getting to finish the season.”

Luttrull said simply finishing the season is one of his team’s goals.

“With COVID and everything, it is crazy,” he said. “Obviously, we want to win our district. Those are goals everyone is going to have, year in and year out. We’re just taking it one game at a time.”

PNG was scheduled to start district play against Crosby this week, but the game was postponed until next week due to coronavirus concerns at Crosby, Luttrull said.

“We are taking this week off and it looks like we are going to be playing on Monday,” he said.

For Lovejoy, he believes the sky is the limit for this team.

“I think we have done very well,” he said. “I am very happy. This is my senior year and I think this is the best team I have played with so far. I am ready for (the Crosby game).”