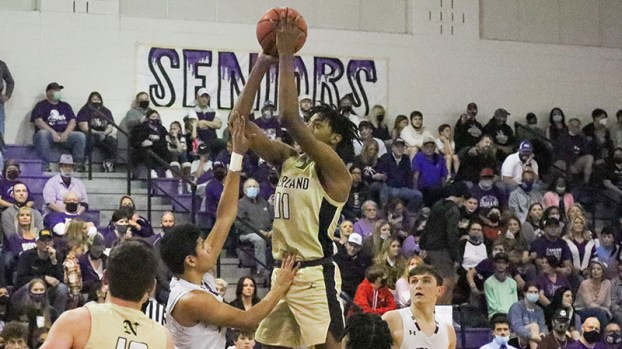 Nederland’s Tyler Jackson pulls up for a mid-range jumper in the first half of the Bulldogs’ 38-30 win over Port Neches-Groves Friday. (Chris Moore/The News)

CHRIS MOORE — As usual, Mid-County Madness does not disappoint

Friday night, Port Neches-Groves and Nederland proved, once again, that team records do not hold much weight when the two meet.

The Nederland Bulldogs strolled into the game with a 17-2 record compared to the Indians’ 5-11 showing. Nederland came away with a hard-fought 38-30 win over PNG.

Prior to the game, PNG head coach Chris Smith said one can “throw out the records” when these two teams meet.

Across each sport, the game seems to be competitive. Earlier in the season, the game between the two teams went in favor of the Bulldogs by way of a 46-31 decision at the Dog Dome.

Nederland knew coming into PNG wouldn’t be as easy.

On Friday night, the atmosphere had a playoff vibe to it. The stands were packed with student sections leading the cheering, which was just for the junior varsity game that came down to a last-second shot to give Nederland the win.

It was a pretty cool moment to see. The young man who hit that shot was on cloud nine and the coolest guy in the arena at that moment.

It’s what each basketball player from PNG or Nederland dreamed of when they shot baskets in the driveway.

Then, it was time for the main attraction. The varsity game marked the last time seniors on the two teams would face each other. Whoever won the game would likely have bragging rights for life.

Student sections for each team made sure the opposing players heard them. From the court, friendly banter from the student section towards players could be heard in an attempt to throw the players off their games.

Neither team stepped onto the court with a swaggering confidence. Both seemed like they felt the energy in the arena, and how overwhelming it could be. Each shot had a chance to set off a crowd on the edge, or be an opening to be mocked by opposing fans.

Even Nederland head coach Brian English said he noticed how the magnitude of the game impacted some of his players.

“Some of our kids didn’t want to step up and make big shots,” English said. “You have to be ready to play in this game. You have to want to take those shots. There is a lot going on. The atmosphere is different here. Some of them just aren’t used to it.”

English also talked about the play of junior Tripp Parker, who finished the game with eight points, five of which came in the fourth quarter to help seal the win for the Bulldogs.

“Tripp Parker played huge for us down the stretch, and this is one of those things that he will never forget,” English said.

Smith, who once coached at Nederland, said coaching in the rivalry is fun.

“When you come out here, hear Cherokee play and the place is rocking like that, it is just a great time and a great place to be,” he said.

NEDERLAND — A year after announcing he would not seek another 4-year term in office, Brent Weaver announced he would... read more