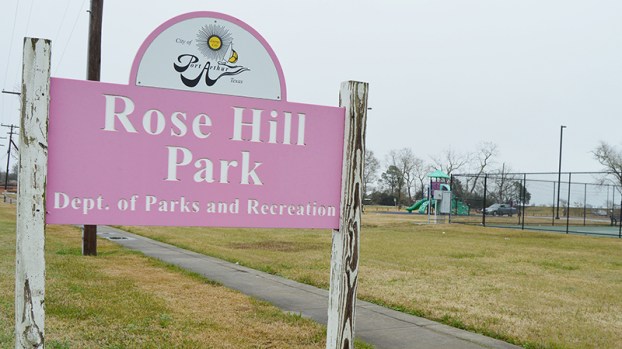 Voters may get option to supercharge Port Arthur parks funding

Voters in Port Arthur have a chance to reallocate sales tax funds to improve two of the city’s parks, making them premier parks.

The second site is Rose Hill Park at Woodworth Boulevard and Procter Street, which features a playground, tennis court and more.

“Due to these unprecedented times that we’re currently living in, it is imperative that we continue to do everything we can to make life better for our community and improve the quality of life and sense of place for our citizens,” Port Arthur Parks and Recreation Director Chandra Alpough told the city council this week.

“We can do this by enhancing and upgrading several of the parks in the city. Upgrading the parks will not only help with the quality of life but can also create an economic opportunity for the community by having facilities with the capabilities to host regional and national football, baseball, softball and soccer tournaments.”

A proposition will be placed before voters on May 1, asking to take 1/8 of 1/2 cent of the economic development corporation sales tax and using it for projects relating to recreational or community facilities.

Alpough said instead of doing little projects at all of the city’s parks, she would like to focus on Adams and Rose Hill by making them premier parks with state-of-the-art facilities.

Adams Park has a number of fields already and plans would include improvements to those fields, concessions, seating and lighting, an irrigation system and walking trails.

A soccer complex with at least five soccer fields would be added, she said. 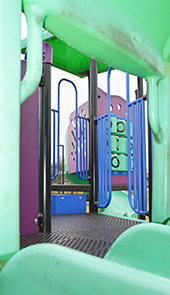 The view through the main piece of playground equipment at Rose Hill Park in Port Arthur.

The field on the site would be for multi-purpose use.

Councilman Cal Jones whose District 2 includes the Lakeview area, reminded Alpough he has been waiting for three years to see work done at the site of the former Lakeview Pool.

The pool has been closed a number of years and is in need of costly repairs. Council at that time approved a spray park project but, Alpough said, there were a lot of unforeseen issues “right off the top.” This meant going back and regrouping. A redesign has been made and the project is going out for bids in the next three weeks.

District 4 Councilman Kenneth Marks and Position 8 Councilman the Rev. Donald Frank Sr. — newly elected to their seats in November — each asked if there is some sort of rendering of the parks to show voters, to which Alpough said she has reached out to several architects for preliminary drawings but currently there are none available.

Frank, who previously served on the Port Arthur Independent School District Board of Trustees, said he is excited about the parks as they are the lifeblood of the city.

Frank wants to make sure the footprint of the parks fit the landscape that’s already there with “the beautiful schools and church being in that area.”

City Manager Ron Burton said he intends to work with the city’s parks and recreation department on the project and hopes to double the amount of money projected.

Out of the 54 students who graduated from Lamar State College Port Arthur in December, five earned a perfect GPA... read more