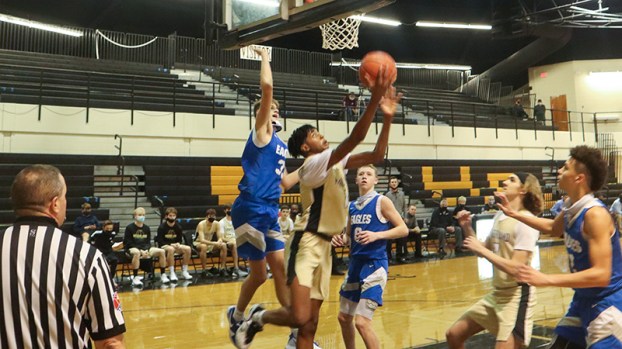 After back-to-back losses to Beaumont United and Barbers Hill, the Nederland Bulldogs had to find a way to get back to basics.

Since the pair of losses, the Bulldogs are 3-0 with the rival game against Port Neches-Groves in their sights.

“Right now, we are just trying to get back to what we were doing earlier in the year,” Nederland head coach Brian English said. “We had a rough week a couple of weeks ago. Slowly but surely, we are getting back to doing the little things that we were doing at one time.”

Nederland (17-2, 4-2 in District 21-5A) defeated Crosby 61-54 Wednesday. English said he hopes the Bulldogs can carry the performance over to Friday. Nederland big man Tyler Jackson put up 35 points against Memorial Jan. 15. Jackson followed that game up with a 32-point, 12-rebound game against Crosby.

“He’s just getting it done,” English said of Jackson. “He’s getting some help as far as other kids getting extra rebounds. You get those and that is extra shots. He is also getting extra rebounds, as well. It has been a team effort. Everyone knows that Tyler is Tyler, and they are just trying to do their part.”

The Bulldogs head coach has seen Jackson getting more aggressive in games.

“I think he is trying to be the best on the floor every night,” English said. “For most of those nights, he has been. He’s just hungry. I think he doesn’t want to taste that bad week again. Once he gets going, the motor gets stronger.”

English said he is not sure what led to the two down performances two weeks ago, but said the team has worked hard to correct mistakes.

“Sometimes, you have to find out what your weaknesses are,” he said. “We figured them out, are getting better and now, we can get back to the things we do well.”

Team defense has improved since the infamous week, but the Bulldogs offense has shown up more on the stat sheet.

In the losses to Beaumont United and Barbers Hill, the Bulldogs were held to 33 and 32 points, respectively.

Nederland has topped the 50-point mark in each of its three previous games, including two games with more than 60 points.

“Our rebounding is better, and I think we are sharing the ball better,” English said. “Those things usually equal success.”

The Bulldogs are trying to stay focused on PNG (5-11, 1-5), but a rematch with Beaumont United, which defeated the Bulldogs 65-33 in their first loss of the season, looms next week.

“They have done a great job (on focusing on the task at hand),” English said. “We focused on Galena Park after those losses and then the next game and so on. That is what we are doing. We are focused on Port Neches and, hopefully, that makes a difference.”

For more coverage, check out https://www.panews.com/2021/01/22/png-coach-bulldog-communication-goes-silent-during-madness/

Lewis: Titans playing hard despite loss to No. 2-ranked BU; key is to continue fighting