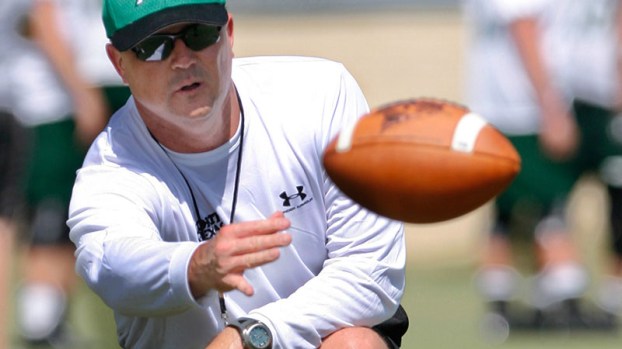 Todd Dodge, a former high school football star in Port Arthur, is coaching for a state title. He leads the Austin Westlake Chaparrals.

That’s how Todd Dodge answered the question as to if he takes anything away from his time playing for a football state championship while at Thomas Jefferson High to coaching for one this weekend as the head man at Austin Westlake.

Dodge’s Chaparrals take on the Southlake Carroll Dragons at 7 p.m. today (Jan. 16) at AT&T Stadium for the Class 6A Division I state championship.

The Dragons are coached by Riley Dodge, who is Todd Dodge’s son.

The state championship matchup between opposing coaches who are father and son is a first in Texas football history.

He said he works to replicate the culture he experienced in Port Arthur four decades ago.

“The first thing is building a culture in a town that is absolutely crazy about high school football,” Dodge said. “Me and my teammates in Port Arthur at Thomas Jefferson had that coming up. It was very evident that our town was in love with high school football.”

Dodge’s Yellow Jackets were 1-9 his sophomore year but improved to 14-1 his senior year, narrowly missing out on a state title after a 28-19 loss to Odessa Permian in the 1980 Class 5A state championship.

“Our head football coach, Ronnie Thompson, was the guy offensively who was way ahead of his time,” Dodge said. “We were doing things offensively that no one in the state of Texas was doing as far as the passing game. The biggest thing I learned from him was the ability to be difficult to defend by personnel.”

Dodge set high school records for most career completions (382) and most completions in a season (221) in an era when the passing game was not as popular as it is today.

He graduated second in career passing yards behind Gary Kubiak.

“It was all about doing things to make your town proud and playing for your brothers,” Dodge said. “Those are the things you try to instill in your teams. The cliché about family on a football team; I lived it. My coaches were like fathers, and my teammates were like brothers.”

Dodge’s parents moved out of Port Arthur during his sophomore year and he stayed with Richard Rice, “who is the closest thing to a brother I have ever had.”

Rice’s family and Dodge’s extended Jackets family made it feel like home.

Dodge is receiving a lot of attention this week because of the coaching matchup against his son.

That’s not something he wants his players to worry about.

“I told them when game day starts and when the day is over with, it is about y’all and about our football team versus Southlake Carroll,” Dodge said. “I am going to do everything I can to help lead this team to a win.”

Port Arthur and Mid-County motorists should start to see road construction improvements begin this year on one of the region’s... read more