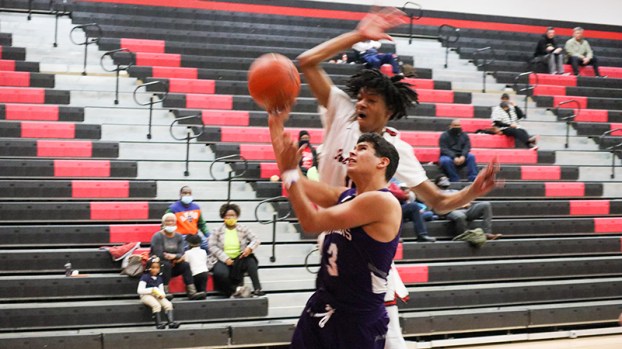 Memorial’s Jackson Gibbs goes up for a block on Port Neches-Groves’ Kenneth Muller during a 64-50 win for the Titans at Memorial High School Tuesday. (Chris Moore/The News)

Memorial boys heating up with win over PNG

After a slow start to the season, the Memorial Titans have team won three-of-four after defeating the Port Neches-Groves Indians 64-50 at Memorial High School Tuesday.

PNG went on a 7-0 run to bring the score to 37-30 midway through the third quarter, but the Indians weren’t able to close the gap any more.

Memorial head coach Alden Lewis said his team had a lackluster performance after the first period.

“We started off well and played with energy and effort,” Lewis said. “Then, we got lackadaisical. There are some things we have to clean up and work on keeping that energy up.”

Titans point guard Yasuel Santiago led all players with 18 points. Maleek Jones and Bryton Willice were also in double figures for the Titans with 14 and 13 points, respectively. Santiago repeatedly attacked the basket and pushed the Titans in transition.

Adrian Hayward, who played running back for the Memorial football team, stepped on the court Tuesday for the first time this season. The junior finished with three points.

Despite PNG’s late attempts to slow the game by fouling in the fourth, the Titans made just enough free throws to keep the game out of reach.

The Titans play Nederland Friday at the Dog Dome, while PNG will host Crosby.

Both games are set to tipoff at 7 p.m.