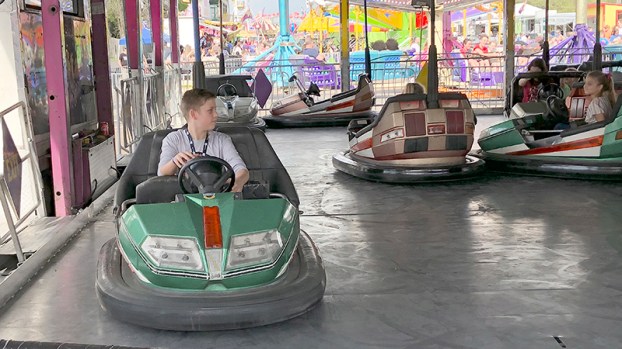 Logan Jones, 13, looks for a victim while riding the bumper cars at the Nederland Heritage Festival in 2020. (Brad Robichaux/The News)

NEDERLAND — If the Nederland Heritage Festival does not take place in March, as scheduled, it is unlikely to be moved to later in the year.

Festival Executive Director Shannon Hemby said the president of the festival foundation told Nederland leaders on Jan. 6 that prior commitments with Gold Star Amusement make postponing the event to later in 2021 “out of the question.”

Hemby’s update provided to Port Arthur Newsmedia Tuesday morning deviated from public comments made the day before at a Nederland City Council meeting, where Mayor Don Albanese said the consensus opinion was to move the event, possibly into June.

“I’m not sure why they said that,” Hemby said, adding the foundation president is scheduled to meet with City Manager Chris Duque to figure out what’s the best path for everybody.

According to Hemby, the Nederland Heritage Festival Foundation would make the final call on this year’s event, a decision that is expected to be finalized in a few weeks.

“I can’t see us going any further than Feb. 1 due to the fact that we would need to give Gold Star Amusement the timeframe they need, and the food vendors the time they need to order food,” she said. “There is just a lot of unknowns right now.”

Hemby said everyone involved wishes they had answers.

On Monday, the mayor and city manager said a final decision on this year’s festival is likely to be finalized this month, possibly during the city council’s Jan. 25 meeting.

“They are still discussing things. It was a very good discussion, a very frank and open discussion. I think everybody felt comfortable with pressing concerns, questions, etc,” Duque shared during Monday’s city council meeting.

Discussion about the festival was not listed on the council agenda, visitors were not allowed into city hall during Monday’s meeting due to COVID-19 concerns and it did not appear festival representatives were on Monday’s city council Zoom call.

Discussion on the issue took place during the meeting’s city manager report.

“I know there are a lot of questions going on,” Duque said. “No decision has been made about the Nederland Heritage Festival. That is still being discussed.”

According to Duque, the festival acts as a major fundraiser for numerous nonprofit community groups.

“If you are planning to move forward in March and then all of a sudden you cancel it two or three weeks out because we had another major (COVID) spike, what’s going to happen to all those clubs that have already paid for their supplies?” Duque said. “It’s already going to be a difficult year because of the COVID and then for them to absorb all those loses. Some of them will be able to sell somewhere else, but for some of them, this is their only fundraiser. It’s a huge gamble.”

Albanese said, as of right now, it would be difficult for carnival ride operators to clean rides with enough regularity during the event to satisfy crowd movement.

The mayor also said Jefferson County Judge Jeff Branick was counting on positive impacts of the coronavirus vaccine by then, but added “we can’t take that chance.”