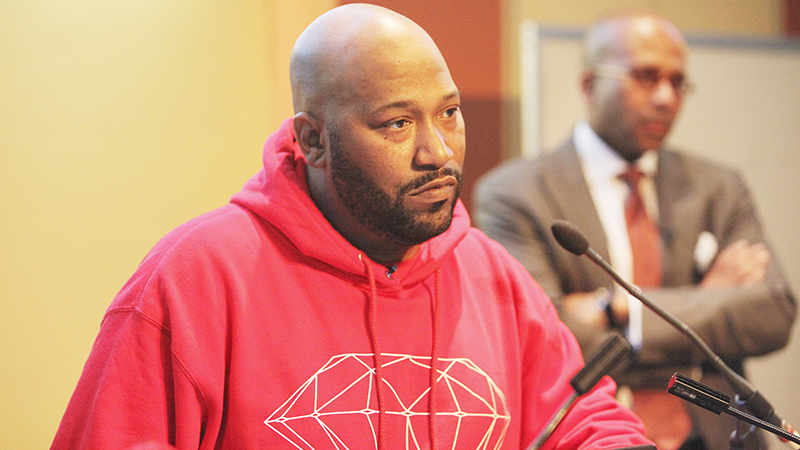 To Dr. Anthony Pinn, the idea of hip-hop music as a religion makes perfect sense.

“It started for me when I was in ministry,” the professor of humanities and religion at Rice University in Houston said. “I was a preteen preaching, but at home I listened to hip-hop. It provided me with a language, a way of expressing what it meant to be a black man in the U.S. It still occurs to me the ways hip-hop does for fellows like me. It answers who are we and what are we. Hip-hop does that. It wrestles with the fundamental traumas of life. It provides us with who we are. There’s a relationship between what hip-hop and institutional religion does.”

Thus Pinn teaches classes on religion and hip-hop culture at Rice, and he’s not the only one dropping such knowledge in his classroom.

(Editor’s note: This story originally appeared in the current edition of Greater Port Arthur The Magazine. The next edition publishes this month. Call 409-721-2400 for subscription details.) 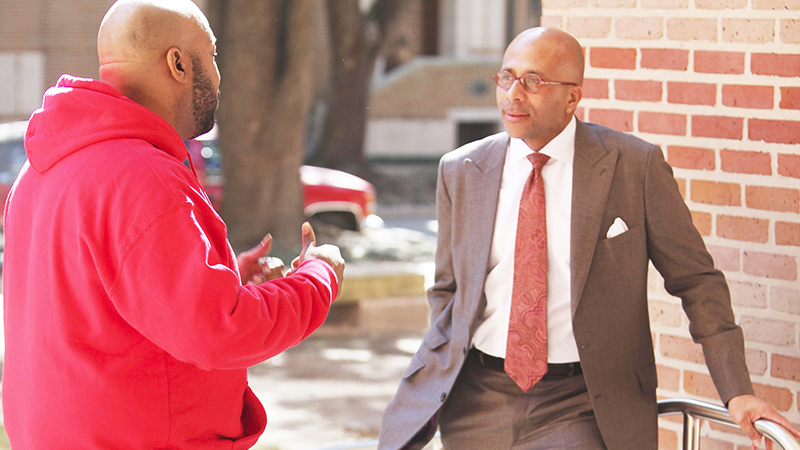 Dr. Anthony Pinn, right, says about his co-lecturer, rapper Bun B: “Bun is a smart dude. There’s no doubt about it. There’s so much he offers in thought and detail.” (Courtesy Erik Quinn Photography)

A Port Arthur rapping legend, Bun B, shares teaching duties with Pinn in each class. Bun B, whose real name is Bernard Freeman, has been a distinguished lecturer at the campus since 2011.

Pinn approached Bun B with the idea of co-teaching the course after another rapper, Chamillionaire, was not available to do it.

“It’s so funny, a lot of opportunities I get to speak, someone wasn’t available,” Bun B said. “It’s usually on social issues and levels of consciousness. If he [Chamillionaire] wasn’t available, he would defer to me. I was asked to stand in his place in the class. I accepted.”

Pinn helms his classes with impressive credentials. A Columbia University grad with a master’s degree in divinity and Ph.D. in religion from Harvard University, Pinn has founded Rice’s Center for Engaged Research and Collaborative Learning and is the first director of the school’s Center for African and African American Studies. He’s also written or co-written more than 40 books including Noise and Spirit: Rap Music’s Religious and Spiritual Sensibilities.

Bun B went on to release five solo albums and has authored two books — Bun B’s Hip Hop Coloring and Activity Book (with Shea Serrano) and Religion in Hip Hop: Mapping the New Terrain in the U.S. (along with Pinn and Monica R. Miller).

When Pinn asked him to lecture, Bun B was hesitant.

“Dr. Pinn is the most tenured man of color at Rice University,” Bun B said. “I didn’t want to mess that up in any way. Doc was really the one who encouraged me. He said ‘I believe in you. I think you would be perfect for this class.’ I can’t say on any level this wasn’t a great opportunity. He’s a great friend. We try to keep in touch as much as possible.” 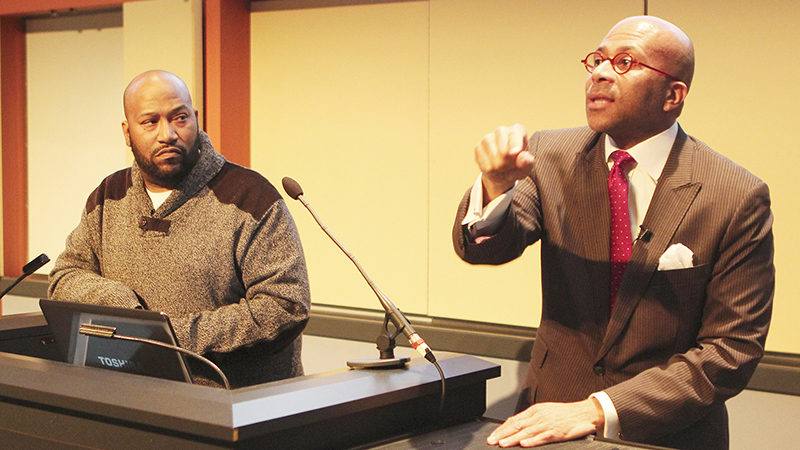 The demographics of the students who attend Bun B’s and Dr. Anthony Pinn’s classes reflect the student diversity at Rice and the “mental image of the fan base for hip-hop.” (Courtesy Erik Quinn Photography)

One connection between hip-hop and religion addresses the basics of religion, Pinn believes.

As to how UGK’s genre of Southern rap speaks to the common person who listens to it, Bun B harkens back to a line from Pimp C: “I don’t need a bodyguard. I just need an almighty God.”

That line, Bun B says, addresses the reality of life as a black man in inner city America and maintains a sense of security and understanding.

“You can take man’s viewpoint, which is to keep a gun to protect yourself at all times,” he explained. “But from a Christian point of view, it is God that protects us in these times and dark places in life. Yea, though I walk through the valley of the shadow of death, I shall fear no evil because God is with me. For many young black men in America, they feel as if they live in the valley of the shadow of death on a daily basis. So, this is one of the ways in which they compartmentalize the way they choose to protect themselves and survive.”

Bun B believes in God. Pinn, a former preacher, doesn’t.

Pinn pointed to a time when he was an undergraduate working at a church in the Bedford-Stuyvesant community of New York City and he saw people thinking about how they would die rather than outlining a bright future.

Pinn decided to leave the church instead of trying to hold onto its traditions he held suspect, but he wanted to remain helpful in a different manner.

“As human beings, we always try to find solutions in ways to try to change our own solutions,” Bun B said. “Although we know God controls everything, we kind of have to meet him halfway. We also subscribe to the notion that prayer without works, people are nothing. Although we give God the praise, the honor and the glory, we have to meet him halfway. We can’t count on him to do everything for us. God will put us in a position to handle something, and we’ll take it from there, but we can’t count on God to do everything for us.”

How, then, might that relate to hip-hop, one asks?

“Our music has always reflected that,” Bun B said. “We give you the message of survival, right, and awareness of dangerous streets in America, but also know there’s a higher power watching over us. … A lot of these young brothers out here dealing with these issues and circumstances in their community, they don’t trust preachers, but they trust us. I think they see preachers on a personal level, not as spiritual leaders. I grew up in a very small town where we knew what the preacher was up to outside of Sunday morning service and Wednesday night Bible study, different ways in which the flesh compromised these spiritual leaders. Because of that, people will look for guidance and information from people who have not compromised in front of them, and for many of them, we are those people.”

A majority of hip-hop artists will lead those seeking guidance to Jesus Christ, Buddha, Allah or another religious figure, Bun B said.

“We don’t want to be the ones giving people bad information,” he added. 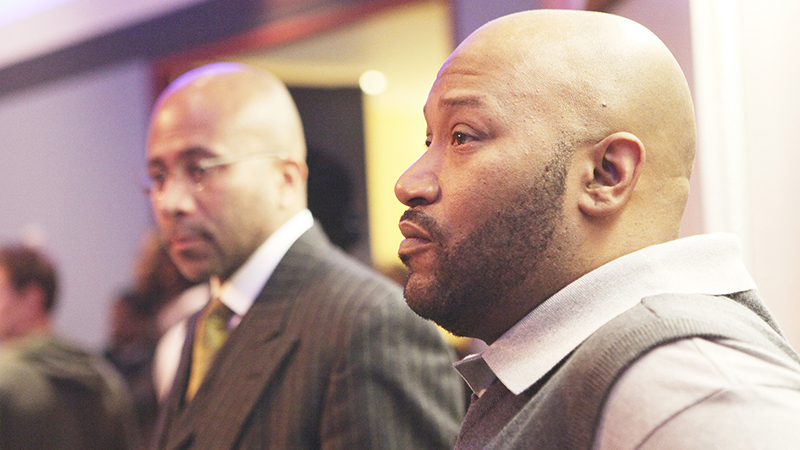 Heads of the class

The year 2020 has presented America with hard discussions on race relations and policing (by either police officers or citizens), given the well-documented deaths of Houston native George Floyd in Minneapolis, Breonna Taylor in Louisville, Kentucky, and Ahmaud Arbery in Brunswick, Georgia. Another native Port Arthuran, former NBA champion Stephen Jackson, has stood on the front lines in an ongoing quest for justice for his friend Floyd.

Bun B and Pinn tackled the racial issues hard at Rice. Their classes, Pinn said, reflect the campus’ racial makeup, which as of the Fall 2019 semester was 44 percent White, 25 percent Asian, 15 percent Hispanic, 9 percent Black and 6 percent other races.

“Many of the students don’t understand hip-hop as a culture, and they barely understand it on a very surface level,” Bun B said. “We try to put everything about hip-hop culture in its proper historical context.”

And break dances have occurred and DJs have spun records for students, Bun B testifies.

“We try to let everyone understand what hip-hop, as a culture, encapsulates,” Bun B said.

The Bun B-Pinn partnership, by their own account, has been a match made in academic heaven.

“It’s been an honor working with Bun B,” Pinn said. “Bun is a smart dude. There’s no doubt about it. There’s so much he offers in thought and detail.”