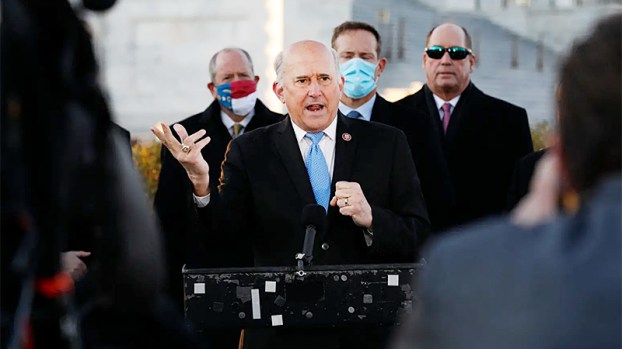 “Basically, in effect, the ruling would be that you got to go to the streets and be as violent as Antifa and [Black Lives Matter],” he told Newsmax last Friday.

The comments drew quick criticism that Gohmert was advocating for violence, which he later denied. U.S. Rep. Debbie Wasserman Schultz, a Florida Democrat, called for a formal congressional censure. “We live in a time where words can cause hurt and harm to people’s livelihoods and their very lives,” Wasserman Schutlz said at a news conference covered by the South Florida Sun Sentinel.

Less than a week after Gohmert’s comments, a mob of pro-Trump rioters clashed with police, scaled the U.S. Capitol walls, and violently forced their way into lawmakers’ offices and onto the floors of the House and Senate. The insurrection happened the same day that Trump again falsely claimed at a rally in the nation’s capital that he had won a second term.

Gohmert was among many Texas Republican political leaders who spent Wednesday afternoon condemning the violence without connecting it to their own rhetoric both before and after the 2020 election.

Texas lawmakers and elected officials have taken the lead on baseless lawsuits that sought to dismiss the results of elections in states including Pennsylvania, Michigan, Georgia and Wisconsin. Embattled Republican Texas Attorney General Ken Paxton was at the forefront of one such long-shot legal challenge, cheered on by both Trump supporters and the president himself.

On Wednesday morning, Paxton spoke at the pro-Trump rally in Washington, D.C.

“What we have in President Trump is a fighter. And I think that’s why we’re all here,” Paxton said to attendees Wednesday morning. “We will not quit fighting. We’re Texans, we’re Americans, and the fight will go on.”

After the pro-Trump rioters stormed the Capitol, Paxton tweeted that he did not believe violence was the answer. Republican U.S. Sen Ted Cruz, who is leading the charge in the Senate to object to some Electoral College votes, echoed that sentiment.

“Those storming the Capitol need to stop NOW,” he wrote on Twitter. “The Constitution protects peaceful protest, but violence—from Left or Right— is ALWAYS wrong. And those engaged in violence are hurting the cause they say they support.”

Days earlier on the campaign trail in Georgia, Cruz tried to rally voters to keep the Republican majority in the Senate.

“We won’t go quietly into the night,” Cruz told the crowd. “We will defend liberty.”

As Cruz’s and Gohmert’s colleagues sheltered in place in their offices and were evacuated wearing gas masks Wednesday afternoon, the longtime representative for Texas’ 1st Congressional District struck a different tone than he did after his failed lawsuit.

“Please people; no violence. That only hurts our cause,” Gohmert tweeted Wednesday afternoon. “Those leading the charge like the guy in yellow with the communist hammer & sickle tattoo: stopping the violence applies to you too.”

Some Texas Democrats, local leaders and a few left-leaning organizations in the state responded to the violence by criticizing their Republican colleagues, Cruz in particular.

Beto O’Rourke, who unsuccessfully challenged Cruz for his Senate seat in 2018, accused Cruz on Twitter of inciting the Trump supporters with a “self-serving attempt at sedition.”

But Cruz immediately countered with his own accusation that O’Rourke was using “malicious rhetoric (such as false & reckless charges of ‘sedition’)” to create more division.

Cruz previously condemned those who criticized him for launching his challenge to Wednesday’s vote, saying they used “angry language.”

“I think everyone needs to calm down,” Cruz told Maria Bartiromo on Fox News on Sunday morning. “I think we need to tone down the rhetoric. This is already a volatile situation”

“The only thing that makes the violent attacks on our democracy and our Constitution worse today is that two of our state’s highest elected officials helped fuel them with their conspiracy mongering,” Val Benavidez, president of the Texas Freedom Network, said in a statement. “They have lit the road to sedition by undermining faith in our democracy to promote their personal and political agendas. Doing so is especially appalling when it incites violence from those who seek to subvert a legal election.”

But it wasn’t just Democrats who were critical Wednesday.

“So many hyped up this day as this day of reckoning, this big win would happen,” Republican U.S. Rep. Dan Crenshaw of Houston told Fox News on Wednesday evening. “So many people said, ‘This would be the last stand.’… ‘It’s our 1776.’ When you use that kind of language, you should not be surprised when people tend to believe it.”

“This is how election results are disputed in a banana republic – not our democratic republic,” he said in a statement. “I am appalled by the reckless behavior of some political leaders since the election and by the lack of respect shown today for our institutions, our traditions, and our law enforcement.”

The Texas GOP, which has been a fierce supporter of Trump, also said on Twitter that it condemned the violence in Washington, D.C. The party removed its sergeant-at-arms, Walter West II, from his post after he appeared to endorse the attacks on the nation’s Capitol building. “You Accepted ANTIFA burning down your cities…Now Deal with them taking back OUR HOUSE!” he wrote on Facebook as the caption to a photo of the protests.

“Americans will be watching on January 6th — this Wednesday — for those who will stand in opposition and say to the deviants who seek to undermine our national election: ‘Come and Take It!’” he wrote.

Allen West did not immediately respond to a request for comment.

As the protests continued into the afternoon, Paxton continued to share unsubstantiated claims on social media. He alleged on Twitter that the people who stormed the Capitol were not actually Trump supporters but offered no information to support the claim. Many of the rioters wore caps with Trump’s campaign slogan, sported T-shirts calling for another term for the ousted president and carried flags bearing his name.

As lawmakers prepared to resume the vote to certify election results Wednesday evening, at least one Texas lawmaker said he was “disgusted” with the siege — but that he also still planned to oppose certification.

— By Kate McGee of the The Texas Tribune, a nonpartisan, nonprofit media organization that informs Texans — and engages with them – about public policy, politics, government and statewide issues.