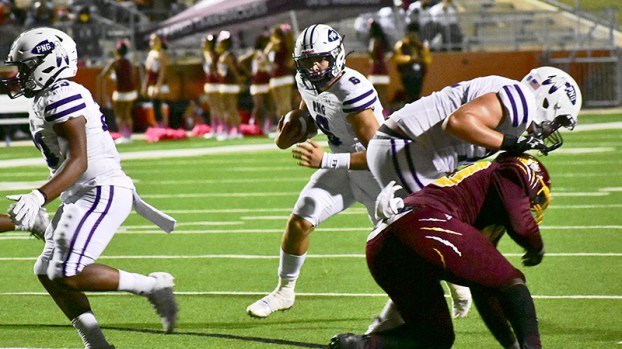 His high school head coach Brandon Faircloth said he was proud of the senior.

“That is something that he worked really hard to accomplish and that was one of his goals,” Indians head coach Brandon Faircloth said. “As a coach, to watch your guys work hard and achieve their dream is something that is second to none. We are extremely proud for Blake and his family. We couldn’t be more excited for him.”

PNG will now have two former quarterbacks on the rosters of top universities in the state. Former PNG quarterback Roschon Johnson currently plays running back for the University of Texas.

Johnson took to twitter Wednesday to congratulate his PNG successor.

“Proud of you man. I’ve seen you grow over the years and it has been fun to watch. Go be great,” Johnson’s tweet read.

Faircloth said both quarterbacks are special.

“I’m super proud,” he said. “They were not only great players, but great teammates and leaders. Both of them were great kids with high character. They set the bar extremely high for future quarterbacks at PNG and that is what we want, for sure. They definitely left this place better than they found it.”

Faircloth said he is a bit relieved the Aggies and Longhorns no longer play each other every year.

“It makes it a little easier,” he said laughing. “It would be like watching your two sons play each other.”