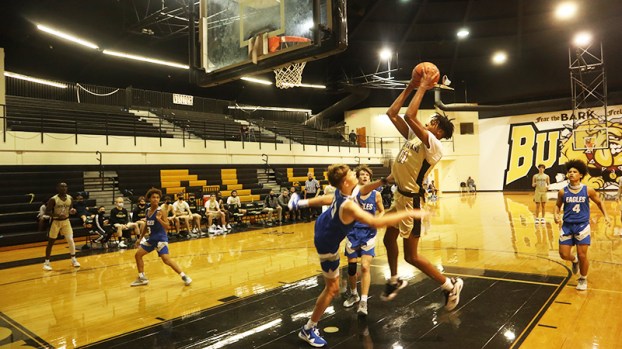 Tyler Jackson, 11, hits a contested shot with a foul in the fourth quarter of a 63-53 win over New Caney at Nederland High School on Wednesday. Chris Moore/The News

The Bulldogs (13-0) leaned on a strong fourth-quarter performance from senior Tyler Jackson to help put the Eagles (4-5) away. Jackson dropped in 10 points in the fourth and finished with a game-high 23 points. 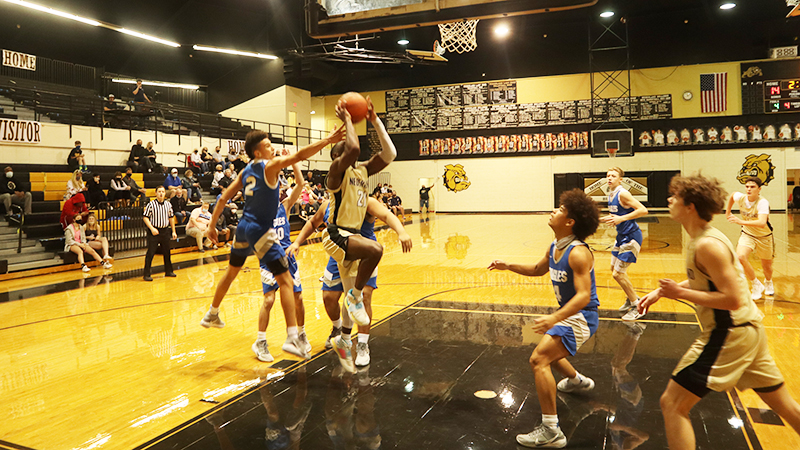 Joseph Gipson, 21, drives the lane during the first quarter of a 63-53 win over New Caney at Nederland High School on Wednesday. (Chris Moore/The News)

“New Caney had a real good team,” Nederland head coach Brian English said. “It’s the best they have had in a while. We survived and found a way to play better the last part of that fourth quarter. We played back-to-back games and it got a little tough on us. It looked like we were a little sluggish, but it is what it is. I’m glad we get to play.”

While Jackson finished with the most points, it was fellow Bulldog Joseph Gipson who started the game with the hot hand. The senior hit three three-point shots in the first half and scored 13 of his 15 points before the third quarter.

“(Gipson) shot it really well in the first half,” English said. “It’s probably our fault that we didn’t get him enough touches in the second half. That is something we got to look at.”

The Eagles outscored the Bulldogs 18-11 in the third quarter to bring the score to 44-41 in favor of Nederland. In the final minutes of the game, Jackson drove baseline and finished at the rim through a foul. Jackson missed the free through, but the basket put the game out of reach for New Caney.

The pair of non-district wins helped Nederland shake the rust of a five-day Christmas vacation before playing against an undefeated Beaumont United team Tuesday. The game will be the second 21-5A district game for the Bulldogs, who beat Port Neches-Groves 46-31 earlier this month.

Roschon Johnson tied for the team-lead in rushing attempts and scored a touchdown Tuesday night in what tuned out to... read more