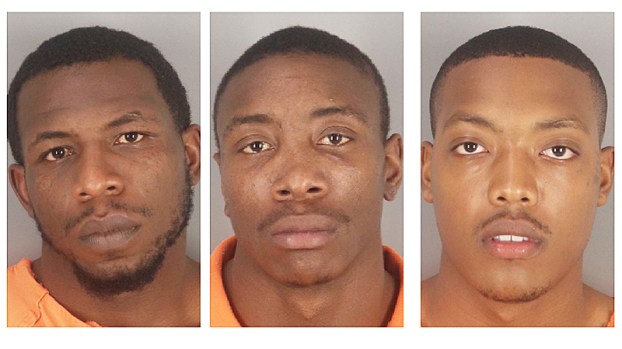 Port Arthur Police’s Criminal Investigations Division, along with federal partners, are looking into the possible connection between the arrest of four men Wednesday during traffic stop and the recent violent crimes at an 18th Street home.

The four men — identified as Derrion Daugherty, 23; Daseqrick Brooks, 26; Fabbian Scott, 23, and Isaac Martin, 28 — were arrested at 12:36 a.m. Wednesday in the 3600 block of Jimmy Johnson Boulevard following a traffic stop.

During the stop, police said the men were found with multiple weapons, which consisted of three loaded semi-automatic handguns and an AR style rifle.

Ski masks were also recovered from inside the vehicle.

“It is our belief a crime was going to be committed,” Hebert said.

Hebert did not specifically say the men are tied to the crimes at the home in the 2500 block of 18th Street, but added investigators and federal partners are looking at the possibility.

At the time of the arrest, one of the men fled on foot but was apprehended, Hebert said while declining to name which suspect allegedly fled.

The Jefferson County Jail Roster shows Isaac Martin as being charged with evading arrest/detention with previous conviction as well as a narcotics charge.

Scott and Daugherty are shown to be jailed for weapon-liquor license premises.

Brooks, according to the jail roster, is charged with possession of a firearm by felon plus other miscellaneous charges.

On Sunday, a homeowner shot and killed one of three men during an aggravated robbery inside the 18th Street house. The deceased was identified on Monday as Terence Ellies, 27, of Port Arthur.

The following afternoon at approximately 5:45 p.m. the house was shot up. Six hours later came a fire deemed suspicious by the fire department.

No injuries were reported in the shooting or fire and no one was at the home when they occurred.

The Jefferson County Sheriff’s Office provided booking shots for three of the suspects arrested Wednesday: Brooks, Scott and Martin. The fourth, Daugherty, does not have a mug shot at this time, according to JCSO.

The outside lower level of Rose Hill Manor may look at bit bare right now, but that will change in... read more