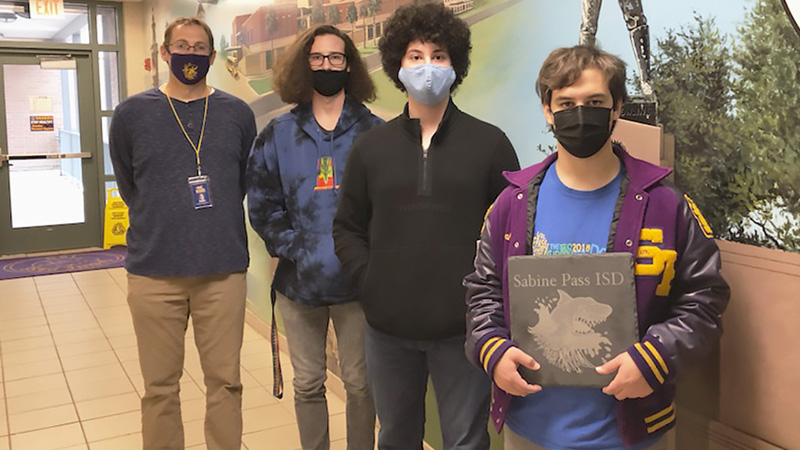 SABINE PASS — COVID-19 be darned, some Sabine Pass School students and their instructor are determined to restore headstones of those buried in nearby cemeteries that date back to the 19th century.

Noah Escareno, Allan Cantu and Cody Schaller were in Scott Hagedorn’s graphic design class last spring when the coronavirus pandemic interrupted their plans to create these monuments. Through the use of historical data and 21st-century technology, the first headstone will soon be restored.

“It’s a long time coming, since we’ve been working on it for most of last year,” Schaller said. “It’s going to be nice finally getting to finish it, especially since COVID hit to stop it. We worked on it for a long time last year.

“It took a lot of time and effort, a lot of different days going into the cemetery when it was really cold outside, a lot of field trips and walking with the iPads and phones and taking videos of everything, all the tombstones that were destroyed and where they were at. We had to build a layout of the entire cemetery so we would know where the old tombstones were and the bodies were buried. So, it was a whole lot of work.” 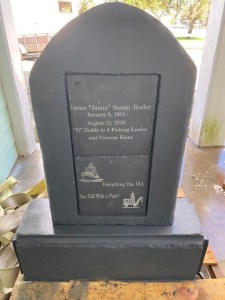 A headstone with etched information on Jamie Butler, the brother of Sabine Pass School faculty member Tom Butler, was created as a test for a headstone project organized by instructor Scott Hagedorn. (Courtesy photo)

Schaller and his two senior classmates are the only remaining students from the 2019-20 graphic design class and take either 3D printing or robotics under Hagedorn. Graphic design is not offered this school year for safety reasons due to the pandemic, Hagedorn said.

But the job is not finished.

“Since they had done a lot of the project — I think they had 80 percent of the project done — it was more or less needed to put on the Glowforge [a laser-etching machine] and have the shop build the headstone,” Hagedorn said. “Since they were seniors, I was kind of wanting them to finish it off before they leave, so we can get at least one of those done. We were originally going to do six.”

According to historical data, Hagedorn and his students discovered one of the cemeteries was last used in approximately 1910 and another includes those interred whose families have not lived in the area since the 1920s.

Some of those interred fought in the Civil War, Hagedorn said. A couple of them, for example, were from Virginia, and their parents couldn’t bring back their bodies, so they were just buried in Sabine Pass.

Others laid to rest don’t have headstones at all. Hence, Hagedorn and his students looked up records from the Jefferson County Historical Society and FindAGrave.com to find out who is buried and what the headstones that remain once said.

“When you’re looking through something like that, unless you’re going through Ancestry.com looking at where people are, most of their families are gone,” Hagedorn said. “That’s why some of those tombstones have fallen into ruin. And you have those hurricanes [of the early 20th century] that literally knocked some of those tombstones off. They just didn’t put those back up after the hurricane.”

The students have created artwork and will etch that and information originally carved into the weathered headstones on tiles of slate for the new headstones.

“We have the computer files for all the information that was on the headstone, name and inscription at bottom,” Cantu said. “We put some flowers on it. That’s what I was working on in Photoshop at the end of the year. All we need to do is get it lasered on a slab and get the headstone built and put it up.”

Earlier this month, they tested the process on a stone created by a shop class honoring the brother of Sabine Pass faculty member Tom Butler.

The students have found satisfaction in restoring pieces of history in their own community.

“Obviously, it’s cool to use stuff like the Glowforge and to be able to do that in school, but it’s really cool to be able to use it for those that have been there for so long and nobody has looked after them,” Escareno said. “Being able to completely restore them is really nice.”

Said Cantu: “I’m pretty sure it’d mean a lot to a person if they remembered them at the very least, like the person’s family.”