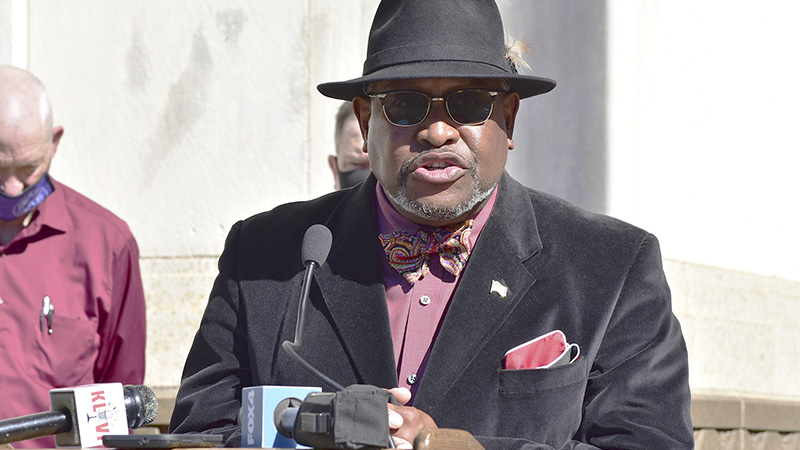 Mayor Thurman Bartie addresses members of the press during a Nov. 18 news conference at the Jefferson County Courthouse in Beaumont. (I.C. Murrell/The News)

The mayor of Port Arthur is “taking his time [and] resting” in a Friendswood hospital as he recovers from a battle with COVID-19, his son said Monday.

Brandon Bartie, the president of the Port Arthur Independent School District Board of Trustees, said Mayor Thurman Bartie “is doing pretty good,” but the family does not have a target date for his release.

Mayor Bartie has been hospitalized since Dec. 17, three days after he underwent a routine colonoscopy.

Brandon Bartie said he didn’t have any details about his father’s symptoms from COVID-19. The mayor told local news media the week before Christmas he lost his appetite when he was released from the colonoscopy but did not develop any other symptoms related to coronavirus.

“I spoke with him when he first got into the hospital,” Brandon Bartie said. “At that time, [my sister and I told him,] ‘Hey, you don’t need to do no talking. Just get yourself together.’ I’ve been getting information from my sister.”

Family members took the mayor’s cell phones away as many people were trying to reach him, Brandon said.

The younger Bartie added his father needed to rest.

“He wanted to check his emails,” Brandon said. “He was bored and trying to move around. We bought him a coloring book.”

Mayor Bartie has been staying in a regular hospital room and was never placed in an intensive care unit, Brandon said.

Brandon said Christmas was “kind of different” with Mayor Bartie in the hospital.

“He normally during the holiday would be at my sister’s holiday or by himself,” the younger Bartie said. “With him in the hospital, my sister is there and watching out for him.”

Brandon asks the public to “keep the prayers going” as his father continues treatment for COVID-19. His message for his father, meanwhile, has been to get himself together.

“Everything will get back to normal,” Brandon said he told the mayor. “The city of Port Arthur will move with or without you.”

The city will canvas votes from the Dec. 19 runoff election for council District 1 and at-large Position 8 on Wednesday.

Ingrid West Holmes and the Rev. Donald Ray Frank Sr., the respective winners, are expected to be sworn in then.