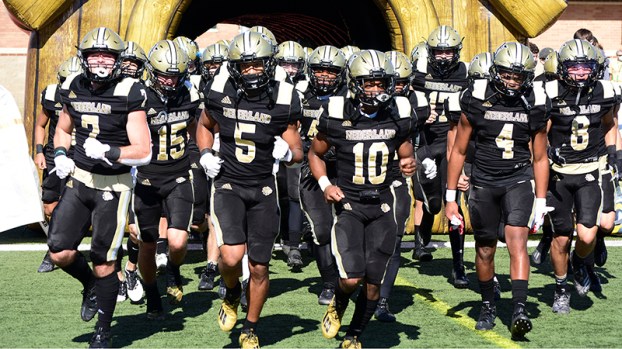 HUMBLE — After the clock struck zero in Saturday’s 5A Division II Region III semifinal, the Nederland Bulldogs met at midfield one last time.

Even though the outcome was decided well before the fourth quarter in the 49-0 win for the Fort Bend Marshall Buffalos, the emotion of the long season coming to an abrupt and decisive end was evident on the faces of coaches and players.

For many Bulldogs, those moments at midfield in Turner Stadium were the last time they will wear black and gold for Nederland.

Senior running back Josh Mazyck said he will miss playing with his teammates.

“I’m going to miss being with my brothers side by side in the black and gold, this coaching staff and playing home games,” he said. “Wherever I go to college, it’s not going to feel like Friday night lights. That’s what I am going to miss the most.”

“They showed me that there are still young men that love the game of football,” he said. “These guys, whether it is playing on a Saturday or Sunday, all wanted to do this growing up. This group would be at the stadium when they were in seventh grade together. This group is a special group. Football is a tough game to play and these are tough guys. We had a lot of tough guys leading us this year in that senior group and we are going to miss them.”

Barrow told his players he hopes they will be able to appreciate their playoff run in the future.

“I hope they don’t take away just the final score of this game,” he said. “I hope they take away all of the memories of the journey. It is all about the journey in football and life. It is not just the end product. It is everything that it took to get there. This was our end product, but at some point they will remember the journey and feel better about it.”

Mazyck said the game did not go the way he wanted, but said that he was proud of his team.

“We have been working since June 8, so this was a long season,” he said. “Our goal was to show people that we weren’t the same team from last year. We did more than what people really thought we would do.”

Mazyck was one of the centerpieces for an explosive offense the Buffalos held in check Saturday. Marshall held the Nederland offense to two first downs and less than 100 yards.

“I wasn’t seeing anything,” Mazyck said. “They studied us the whole week. They keyed on the playmakers. It showed that they were the better team today.”