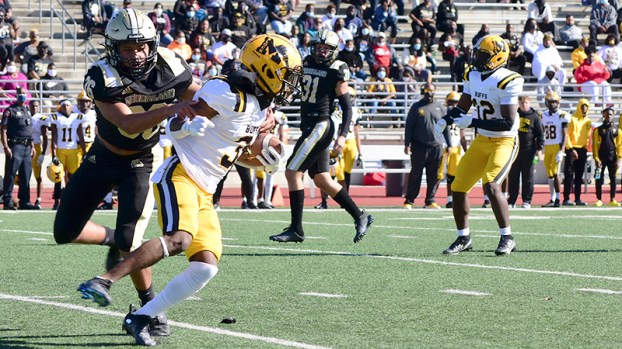 HUMBLE — The Fort Bend Marshall Buffalos shutout the Nederland Bulldogs in a 49-0 blowout at Turner Stadium on Saturday.

The Buffalos (12-0) dominated the game from kickoff to final whistle in the 5A Division II Region III semifinal. The Bulldogs (9-3) turned the ball over six times and Marshall held the usually explosive offense to 73 total yards and two first downs.

The Bulldogs did not overcome first-half blunders against the Buffalos. After both teams went three-and-out to start the game, Marshall connected on an 80-yard touchdown pass that bounced of a Nederland defensive back’s hands before 6-foot-4 Chris Marshall grabbed it and scored. 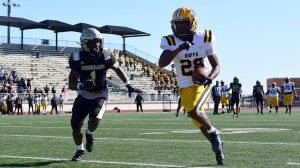 The Bulldogs failed to catch the ensuing kickoff that went about 30 yards downfield before Marshall recovered. However, the Nederland defense held tough to force a turnover on downs.

The Bulldogs struggled to move the ball in the first half, earning only one first down on their third drive. After the first down, the Bulldogs attempted a fake punt, but a low snap threw off the timing and junior Kyndon Fuselier threw a pick on the Marshall 49.

Marshall continued to get big plays through the air, connecting on a 55-yard pass from Roland Harvey to Terrence Fontenot that got the Buffalos down to the 1-yard line. Marshall scored on the next play on a run up the middle to give the Buffs a 13-0 lead with 7:06 left in the first half.

After going three and out, Nederland punted the ball to Marshall, which responded with the longest drive of the first half. An 11-play, 60-yard drive that was capped off with an 8-yard TD pass with 7 seconds remaining.

The second half wasn’t any better for the Bulldogs. The Nederland defense held strong as long as they could, forcing the Buffs to punt on their two opening drives, but Nederland got only one first down. With 4:21 left in the third, Marshall connected on a one-play, 60-yard TD pass that the receiver caught with one hand at the goal line to give Marshall a 28-0 lead. 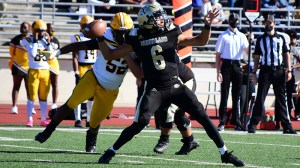 Marshall capitalized on a Nederland fumble and scored on a 20-yard run.

Marshall’s defense got on the board twice before it was all said and done. The Buffs sacked Cunningham, who lost the ball in the end zone before a swarming Marshall defense fell on it. On the next drive, Cunningham threw a pick that was returned for a 30-yard touchdown.

Down 13-0 in the second quarter, Nederland dialed up a deep pass to senior running back Josh Mazyck, who broke free from coverage, but dropped the underthrown pass from quarterback Rene Cunningham. If caught, the Bulldogs would’ve had the ball deep into Buffalo territory. The Bulldogs failed to convert a fake punt on the next play. 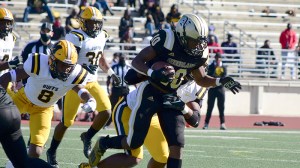 The Marshall defense, which pitched a shutout against an offense that lives on big plays. The defense recorded two defensive touchdowns to end the game.

Marshall out gained Nederland 417-73 total yards. The Bulldogs only had two first downs for the game. Mazyck had 15 carries for 34 yards and Nederland receiver Kyndon Fuselier had four catches for 16 yards. Marshall quarterback Harvey completed 11-of-25 for 261 yards and two touchdowns. He also added 31 rushing yards on seven carries.

Marshall will play the winner of Huntsville and Crosby for the Region III championship.

The Nederland Bulldogs will have their work cut out for them when they face the No. 3 ranked Fort Bend... read more