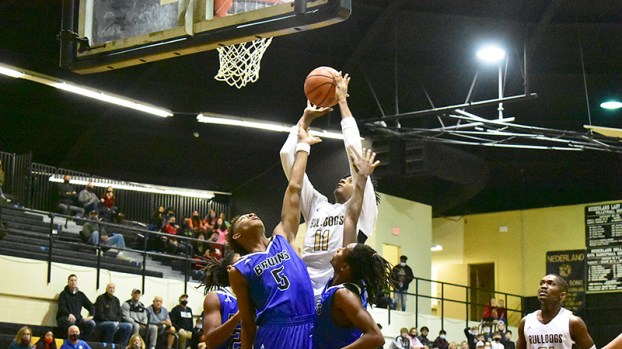 Tyler Jackson (11) of Nederland puts back a miss against heavy defense from West Brook on Tuesday as Joseph Gipson (21) looks on. (I.C. Murrell/The News) 12-8-20

The Bulldogs’ Tyler Jackson led all scorers with 25 points in both teams’ District 21-5A opener.

“The most important one is the first one in district,” Nederland head coach Brian English said. “We didn’t have a great start, but we had a good second half. We are proud of the kids for sticking with it, staying with the game plan and executing.”

English said Jackson’s performance is a credit to his conditioning.

“His motor is a whole lot better than when he was younger,” he said. “He’s had the tools but his motor wasn’t always there. His motor is catching up to his ability and that makes for a pretty good performance each and every night.”

English said the Bulldogs have three non-district games next week to help shake the rust that could have set in over the five-day break, which the University Interscholastic League mandates.

“We’ll have practice Monday and have games Tuesday, Wednesday and Thursday,” he said. “Hopefully, we will be ready for the next district game that following week.”

The Bulldogs will play West Orange-Stark at 3:30 Tuesday at Nederland High School.

The Memorial boys basketball (4-8) team started district play with a 44-43 win over Barbers Hill on Tuesday. The game marked the first time that head coach Alden Lewis had players from the Memorial football team on the court for a game.

Lewis said his roster grew from about seven players to 11.

The Titans reaped the benefits early as senior Maleek Jones, who played safety for the football team, led the Titans with 15 points, 10 rebounds and three blocks. Titans running back Adrian Hayward and quarterback Jah’mar Sanders also joined the team.

“It makes us more competitive,” Lewis said of the returning players. “We have more depth. I didn’t expect them back this early. They are coming in ready to work. It is unfortunate that they did arrive early, but they are here now and we have to move forward and make the best of it.”

Lewis said the football players are channeling some of the energy of being ousted in the first round to the basketball court.

“It is a good thing and a bad thing,” Lewis said. “They didn’t want football to end, but basketball is something that they can rebound in. It is a way to channel that and get some redemption in another direction. I think it will be good for them and hopefully for us as well.”

Lewis said he has challenged his team to work on its own during the break to stay loose. He said it is difficult to finally get the full roster together and turnaround and have a five-day hiatus.

“You have a couple of days of practice and play and then are off for five days,” he said. “I left the responsibility up to the players to get to a park or gym to get some shots up and continue to work on their game. That way, when they do come back, they can pick up where they left off and stay in the groove of things.”