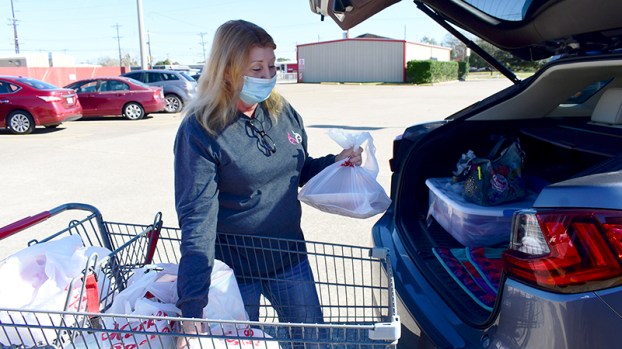 Kaye Mendoza of Groves buys groceries for her family from Bruce’s Market Basket in Groves on Tuesday. (I.C. Murrell/The News) 12-22-20

Jefferson County is among a number of Southeast Texas counties whose number of COVID-19 patients has exceeded 15 percent, causing the rollback of certain restrictions.

The rollback means no elective surgeries, and business capacity is back down to 50 percent or less.

Gov. Greg Abbott issued a July order requiring residents to wear masks when out in public and law enforcement is tasked with enforcing the order. Locally, law enforcement officials say they haven’t had any issues with the enforcement.

Port Neches Police Chief Paul Lemoine said they are using education and warnings as a way to create compliance.

“If there are any complaints, then we will go and talk to people, educate them,” Lemoine said. “We have not written any citations.”

Lemoine said his department responds to any complaints and have not had enough to be noteworthy. One complaint came from a person who drove by a popular restaurant and saw a bunch of vehicles. Nothing came out of the complaint.

The chief noted eateries are working toward compliance with some removing tables and spacing out the remaining ones.

“People comply as much as possible. We haven’t had to shut anybody down,” Lemoine said.

Nederland Assistant Chief Andy Arnold said police are relying on and getting voluntary compliance from most people. Stores, he added, are helping by adding signage reminding customers to wear a mask.

Arnold said they have not given out any citations but have given verbal warnings.

Groves City Marshal Norman Reynolds Jr. said, to date Tuesday, police have not responded to any calls of complaints of people not wearing masks.

Groves Police officers have not issued any citations for the violation, he said.

Should there be an issue at a business where a customer is not in compliance, the business owner can give the person a criminal trespass warning, meaning the person would not be allowed on the property if he or she does not comply with the request, Reynolds said.

“That is probably the most effective,” Reynolds said of the mask issue. “Fortunately, we have not had to deal with that yet.”

Port Arthur Police Chief Tim Duriso did not respond to Port Arthur Newsmedia’s request to comment Tuesday, as he was still reviewing the orders issued by the governor.

Other areas included in the rollback include: Orange, Liberty, Newton, Hardin, Brazoria, Chambers, Galveston and Jasper.

Eric Barragan’s love of computers started as a 3-year-old logging onto nickjr.com, then grew as he became older. He later... read more