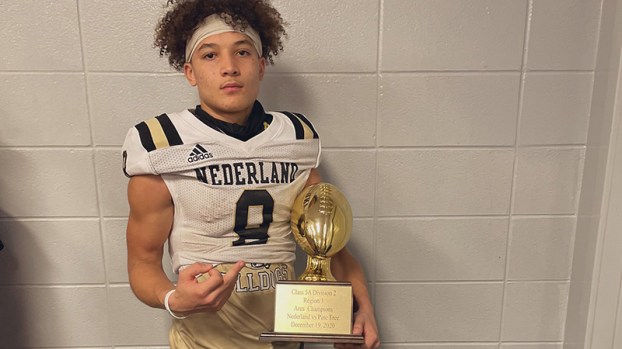 Big plays by Nederland’s two-way star propelled the Bulldogs into the third round via a 34-21 victory over Pine Tree in the area round of the 5A Division II playoffs at Homer Bryce Stadium on Saturday.

Bulldogs receiver/defensive back Kyndon Fuselier scored on both sides of the ball within 16 seconds to help break the game open.

“He’s a gamer,” head coach Monte Barrow said of Fuselier. “I hate using that term, because some think it means a guy that plays well but doesn’t practice good. That guy practices every rep like it’s a game. He wants to stay in every rep in practice because he knows he needs that conditioning in games. He just does some special things. Thank God he is a junior.”

The Bulldogs scored 27 points between 6:00 left in the second quarter to 10:00 left in the third. Fuselier, who had a major role in each score, said he could feel the momentum swing.

“We were definitely hype,” he said. “The momentum switched. We were just trying to keep going and stay on their necks.”

Fuselier’s 33-yard pick-six gave the Bulldogs a 20-0 lead going into the half.

“They had ran that same play about three times, so I was baiting him,” Fuselier said. “I saw him go back to throw it, and I just jumped on it. It felt great. There is nothing like it.”

Barrow said he is happy the program will be in the third round for the first time since 2012.

“Feel best for these kids,” Barrow said. “I know this senior class and what they have put into this and what the game of football means to them. We want to (build) great young men, who are going to go and create a positive and successful society when they leave us. At the end of the day, this is still a game and these guys love playing it.”

Fuselier said he is happy for the community.

“We take pride in it,” he said. “All season, it was our goal to get past round 2. Achieving that feels really good.”

The Bulldogs will take on Fort Bend Marshall at 1 p.m. Dec. 26 at Turner Stadium in Humble.

NACOGDOCHES — For the first time since 2012, the Nederland Bulldogs will play in the Region III semifinal of the... read more