I.C. MURRELL — (Video) We’re not at the finish, but we cleared a COVID hurdle 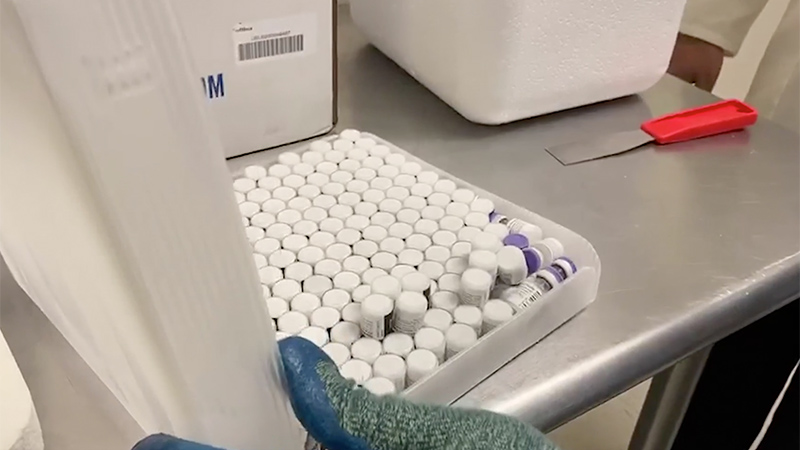 A historical moment in Jefferson County took place in a Beaumont hospital on Thursday.

Or as the CHRISTUS Southeast Texas Health System explained, an important milestone occurred.

The first doses of COVID-19 in the county were administered at CHRISTUS St. Elizabeth to associates of the health system. A blessing of the vaccine was held after the vaccine was thawed.

CHRISTUS even released a 3-minute video of doctors opening the first case of the Pfizer vaccine vials, some of which were stored in a minus-65.6 degree Celsius (minus-86.08 Fahrenheit) refrigerator.

You can see for yourself how chilled the cardboard box was; one person had to wear gloves to handle the package.

The beginning of the end to a long fight against coronavirus has commenced. Or was it a marathon? Or was it both?

Whatever the metaphor, those that are still standing have weathered this challenge.

But the truth is, healthcare workers were going to be the first to receive the vaccine. Maybe — just maybe — that will encourage others to take the shot.

It’s the best shot we have.

If it helps here in this city, Port Arthur Health Department Director Judith Smith is unwavering in her commitment to take the vaccine. She’s taking what she calls “a leap of faith,” adding not many adverse reactions from vaccines taken across the country have been reported.

At this seminal moment in history, more good news has come in the war — ah, maybe that’s the word — against coronavirus.

The Food and Drug Administration, according to multiple reports, say vials of the Pfizer vaccine may contain six or seven doses instead of the five it’s labeled to hold. Now, that could expand what’s been up to this point a limited supply of the medicine.

Just think what that could do for hospitals in smaller areas.

The Medical Center of Southeast Texas on Tuesday said it was preparing to receive COVID-19 vaccinations “later this week.” Smith said she has not been given an estimated date of vaccine arrival to the Port Arthur Health Department.

“We registered and we’re not sure when it’s coming in,” Smith said.

On the flip side of optimism, COVID-19 has dealt another bad blow locally. The PAHD on Thursday reported the 49th death related to the disease in the city. It was not determined whether the woman, aged between 55 and 60, had underlying health conditions.

The PAHD has also reported 17 deaths for Nederland and six each for Port Neches and Groves.

A single-day record for reported COVID-19 cases in the PAHD region was set Dec. 10 at 135. That’s entirely too many cases, and that was the fear of health officials as we came off the Thanksgiving holiday.

Since Dec. 10, however, the numbers haven’t been as alarming, but still disturbing. The majority of residents are observing warnings of wearing facemasks and practicing handwashing and other good hygiene, Smith believes.

“I do know it was really good the message Judge Branick put out again making sure businesses would enforce [Gov. Greg Abbott’s order for wearing masks in public] as much as possible,” Smith said. “We still have not received all the information from the Civic Center. We’ve been trying to help people retrieve their results.”

Yikes. The number could be bigger.

So, if this is a marathon we’ve been running, we must realize we’re not at the finish line. But judging from the sigh of relief from even sportscasters who have to witness empty stadiums as precautionary measures against the spread of COVID-19, we’ve cleared one heck of a hurdle with the vaccines.