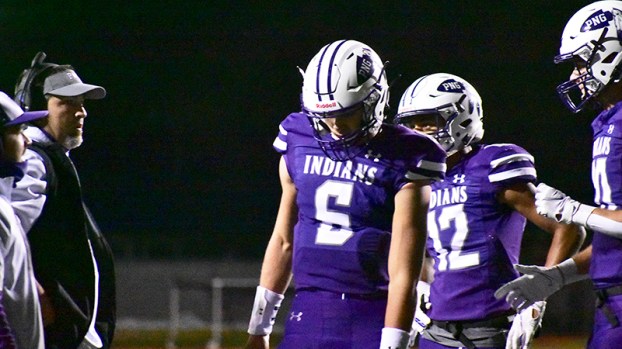 PNG not worried about past against familiar playoff foe

PORT NECHES — The Port Neches-Groves Indians are very familiar with their first-round playoff opponent. The Fort Bend Marshall Buffalos forcefully ejected the Indians from the 5A Division II playoffs for the last two years.

In 2018, the Buffalos beat PNG 53-14 in the Region III semifinals. Last year featured a first-round matchup, in which Marshall defeated the Indians 48-14.

The Indians grabbed the last District 12-5A Division II spot in the playoffs Friday after beating Santa Fe and getting help from Barbers Hill, which defeated Texas City.

The Indians were able to extend their playoff streak to eight consecutive years, but winning their next game against undefeated Marshall (9-0, 8-0 in 11-5A-II) will prove to be a tough task once again.

“There has been 4-seeds upset 1-seeds in every week of the playoffs this year,” Faircloth said. “They are a tough matchup as everyone knows. Coach (James) Williams and his staff do a great job. We are going to have a great week of practice, go over there and play our best game.”

The Buffalos have a point differential of 501-20 for district games, winning those games by an average score of 63-3.

The Buffalos scored at least 60 points in every game except one, which was a 56-0 victory over Fort Bend Willowridge.

“The way you slow down their offense is to keep them on the sideline,” Faircloth said of Fort Bend Marshall. “Our offense has to do a great job of moving the football and running the clock. That is not a secret by any means. We can’t go three and out and put our defense in bad spots. Playing good defense is the responsibility of the team … You have to stop the ball and make them run more plays and hope for some mistakes. That will be everyone’s plan playing them. We just have to go and execute it.”

“It impacts practice a little bit,” he said. “We have to combine Wednesday and Thursday into one day. We still get everything we need to hit, though. It does take some adjusting.”

Faircloth is hoping his team can use energy from their 41-7 win over Santa Fe last week.

“Football is a game of momentum and a game of confidence sometimes,” he said. “We had a great game last week and a great senior night here at the Reservation. We got all of the seniors in and able to play. Then, to get into the playoffs was icing on the cake.”

PORT NECHES — Often, when analysts talk about offensive and defensive line play in football, they use the phrase hand-to-hand... read more